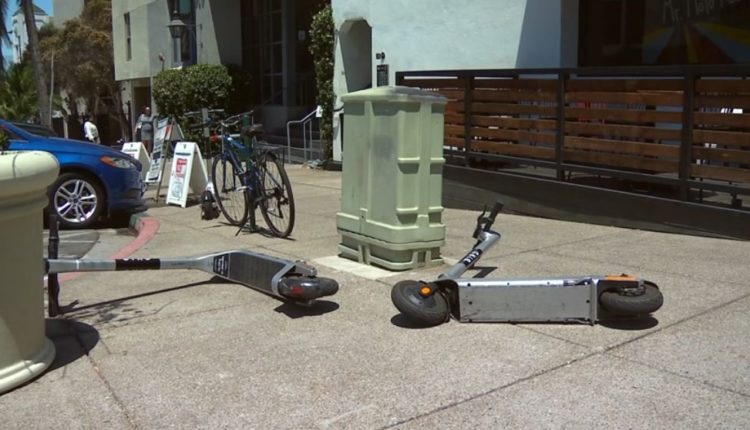 Safety advocates and residents are voicing frustration over a familiar topic that fell off the radar for most people during the pandemic: scooters, and the reckless behavior of people driving them.

“This summer, the 4th of July, has been chaos and mayhem, and no one has done anything about it,” said Jonathan Freeman of the group Safe Walkways. “The city is abrogating its responsibility.”

Safe Walkways’ primary focus is to keep scooters off sidewalks. It’s a problem in many communities, including Little Italy, where Lorie Peiniger has been forced to walk around scooters parked on sidewalks.

“There just doesn’t seem to be any consequence,” Peiniger said. “And you can’t even tell people you’re not supposed to drive on the sidewalk — they just blow you off. I don’t know what to do about it, but it’s a problem.”

The city’s current ordinance, which went into effect in July 2019, lacks teeth, according to Freeman, who wants riders ticketed and illegally parked scooters impounded. He would also like to see targeted enforcement, which he said is nonexistent

“I’m so frustrated and so is everyone else, because the quality of people’s lives is drastically being affected by this failure — ongoing, repeated failure, for years now — of the city to step up and solve a problem that wouldn’t cost anything to solve,” Freeman said.

The pandemic had a significant impact on scooter ridership.

Right now, there are six companies permitted for up to 9,750 devices in San Diego. The city said the most that have actually been deployed in the current permitting cycle (which started in Jan. 2021), is 7,800. The average number deployed at one time is 6,100, according to a city representative.

Meanwhile, the city of San Diego is hoping to come up with a new safety and enforcement plan by the end of the summer.

“The mobility department is presently working on a request for proposals (RFP) that will be released later this summer to select a small number of scooter companies to operate in the city,” Anna Vacchi Hill, senior public information officer for the city of San Diego. wrote in an email to NBC 7. “This will provide for a mix of options, such as scooters and e-bikes, and an ability for the city to continue to improve operations and management through a smaller number of scooter companies, data and key performance metrics, and productive partnerships for more mobility choices to get around.”

While the city’s RFP could limit the number of companies providing scooters in San Diego, it still raises concerns for Freeman.

NBC 7 reached out to the six companies providing scooter service in San Diego. Only two have responded so far.

“Scooters offer San Diego residents a reliable and efficient way to get around,” said David Fairbank, general manager of Lyft Bikes and Scooters in California. “Safety always comes first, and we continue to take multiple actions to support riders, our team members and our city partners, including a $1 incentive for parking in a scooter corral.”

“We prioritize the safety of riders and pedestrians alike, and we are constantly striving to be the safest, most responsive operator,” Rosenkranz said. “As a company grounded in urban planning, we believe that rider safety and education is key to a functioning urban mobility environment.”