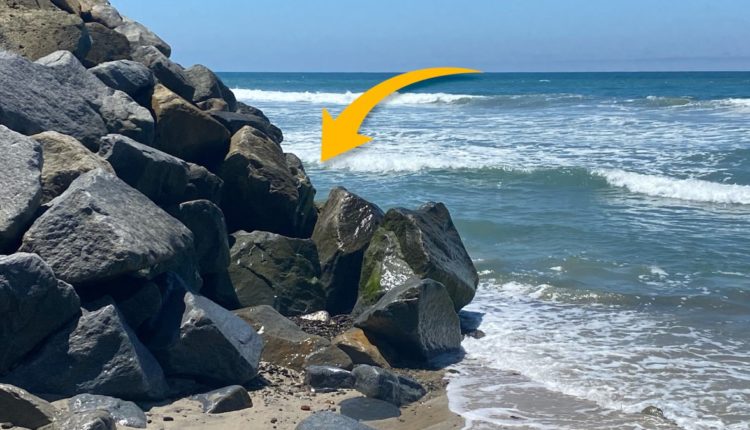 Calls for help from a man trapped at Buccaneer Beach were answered over the weekend by a good Samaritan and rescuers from the Oceanside and Carlsbad fire departments.

“To put it plainly, the Oceanside Fire Department saved this man’s life,” the department said in a news release sent out over the weekend. “Firefighters were completely soaked by the crashing waves and time was running out with the incoming tide.”

The good Samaritan heard the cries of the man, who is in his 40s, around 2:30 a.m. and ran over to help, finding him trapped — he had slipped while looking for his keys and got his arm wedged in a gap between boulders near the 1500 block of South Pacific Street. The good Samaritan was unable to pull the man to safety, however, so a call to 911 was placed at 2:47 a.m., with Oceanside’s Engine 212 arriving seven minutes later.

Calls for help from a man trapped at Buccaneer Beach were answered over the weekend by a good Samaritan and rescuers from the Oceanside Fire Department, reports NBC 7’s Joe Little.

Making a difficult rescue much more dire for the firefighters was the fact that they were in a race against the incoming tide. As the first-responders worked to free the man from the rocks, waves began to crash on the beach around the victim and his rescuers, with the trapped man eventually becoming fully submerged.

“We were constantly up to water right here,” Oceanside firefighter/paramedic David Pepsny recalled to NBC 7 on Tuesday at the scene, gesturing halfway up his face, with the side of his head parallel with the ground. “… and so he would just completely disappear underwater and then just come back and f—ing pleading, you know?”

Quick-thinking firefighters were able to supply the man with a SCUBA tank and regulator, however, giving him lifesaving oxygen as the incoming waves covered him.

“We really didn’t have a lot of time,” OFD Capt. Andrew Stotts said.

“About as terrifying a situation as you could be,” Pepsny added.

Something, though, went wrong, and after 45 minutes of relentless waves repeatedly knocking the regulator out of his mouth, the firefighters watched the man drown right in front of them. Just before all was lost, however, the firefighters were able to wrap the man in webbing and used that to pull him free from the rocks and paramedics were able to resuscitate the drowned man.

“The team came together when it was most needed,” said OFD Capt. Mike Farnham.

The unidentified man was brought to Scripps La Jolla hospital for treatment after the incident. Pepsny got a call from the man on Saturday.

“He’s like, ‘I’m the guy that you saved the other night,’ and he was crying,” Pepsny said. “He was thankful. It was a big deal.”

“Great teamwork and reliance on training helped produce a successful outcome,” OFD said in its news release. “The Oceanside Fire Department would like to remind the public that walking or playing on the large rock ‘walls’ along our beaches is dangerous and people should refrain from doing so.”

“This is the craziest call that I’ve ever been on,” Pepsny said.

The man is expected to be released from the hospital soon.