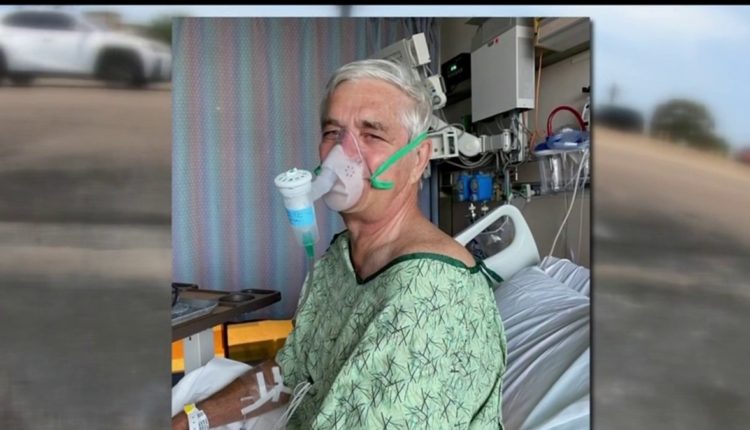 When Mike Pallamary sees smoke, he rushes toward it. That’s what happened July 10 as he drove inland on Camino del Rio South in the Midway District.

Smoke and flames poured out of a van that had pulled to the side of the road in front of The Rock Thrift Store. Pallamary ran up to the van, slid open the side door and saw a man in the driver’s seat and someone else sitting on the passenger side.

“I said hey, you’ve gotta get out of here,” Pallamary recalled. The two people jumped out and ran away, leaving Pallamary to deal with the fire.

He ran into the thrift store and yelled for someone to give him a fire extinguisher. Pallamary ran outside with the extinguisher and got to work.

“I knocked it down,” he said, as he was approached by a woman who appeared to be homeless.

“She started crying. She said ‘Help me, help me,’ and I said ‘What’s the problem?’ and she says ‘My car won’t start.’” Pallamary saw that her car was parked several feet from the fire and was packed with all her belongings. He was concerned that her car might also catch fire so he ran inside a hot tub store and borrowed their fire extinguisher.

“I started fighting it with the second fire extinguisher to try to suppress it,” Pallamary told NBC7. As he emptied the extinguisher, “the flames just blew up and a whole cloud of black smoke overwhelmed me,” said Pallamary.

He wound up in the UC San Diego burn unit with a bad case of smoke inhalation. He was in the hospital for three days, and nearly two weeks later has a dry cough and continues respiratory treatments.

“It was harrowing and I’m having a lot of breathing difficulty, but the most important thing I thought was I would do anything I can to save those people. That’s the top of my list, and do everything I could do to save this woman’s home, everything she possessed, from burning up,” Pallamary said.

Pallamary has a unique gift for showing up at fires.

“Last September I went into a burning market in Clairemont,” he told us. Pallamary described how he helped turn off propane burners in the kitchen and helped evacuate staff and neighbors.

In 1986, Pallamary made national news after rushing into a burning apartment building in El Cajon, alerting more than 30 residents and trying unsuccessfully to rescue a 19-year-old man.

“I just can’t sit by and watch anybody be placed in jeopardy if I have a breath in me to help them,” said Pallamary. “The poor boy in El Cajon. I was 10 feet away from him and the apartment blew up on me. I still get very depressed thinking about it because he died.”

Pallamary was awarded the Spirit of Courage Award from the Burn Institute for his actions. He also gained national attention after the city of El Cajon gave him a $190 bill for paramedic services, including a 50% surcharge because he doesn’t live there.  After some bad publicity, the City Council canceled the bill.

Pallamary said it’s in his DNA to help people. He wishes more people would join in. “Regrettably most people will drive by and they’ll see something that doesn’t look right but they don’t stop to involve themselves,” he said. “I’d like to think that we’d all do that for others. Someday I may need help, but the world has gotten cold. People have gotten hard.”

Pallamary said his wife and two adult sons have told him he’s getting too old for his brand of heroics. He turned 68 in January.

“I have two boys and they say. ‘You know, dad, you can’t play Superman forever.”