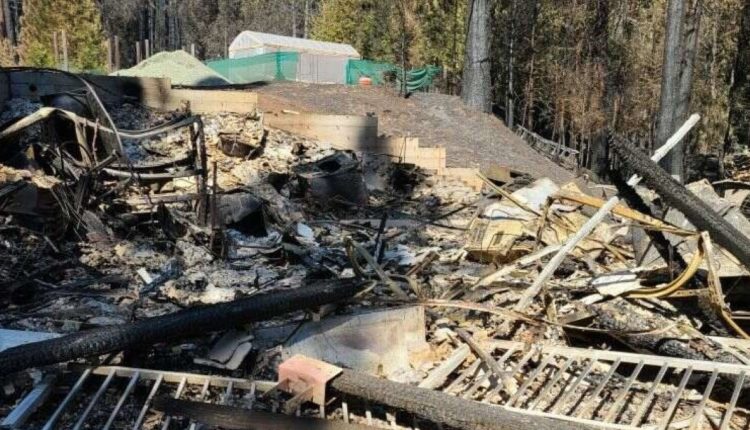 Tiffany DeVos and Brent Richardson spent 10 years building a life with their two girls in Grizzly Flats near Tahoe, but it took the Caldor Fire, which has grown to more than 216,000 acres, just minutes to destroy it.

“I mean, even now it just makes me shake, and, you know, thinking about it,” Richardson said.

DeVos and her daughters say they evacuated their home a few days after their 4-year-old Sequoia’s birthday celebration on Aug. 13.

Pictures they snapped a few days later show the fire devouring trees and brush nearby, before making it to the front door of their home.

All the while, DeVos kept watch on their home security camera.

“I just watched my ring camera the entire night until the power went out and I couldn’t see anything, and you can just see it getting brighter and brighter and brighter, and then nothing. I feel bad that our 4-year-old daughter is having trouble adjusting to, you know, living in a trailer, and she keeps saying, ‘You know, mommy, our home is gone!’ It’s just those things that get to me,” explained DeVos.

With their home reduced to rubble and the family now living in a trailer on a friend’s property, DeVos’ sister Shannon Esparza in San Diego has started an online fundraising effort.

“She still has to work,” Esparza said of her sister. “She still has to show up for her 4-year-old and her 18-year-old. She still has to go through the motions of pretending it’s OK for them and trying to make sure that they know they can have a place right now and at the end of the day, it’s not home and won’t be until she can rebuild.”

DeVos said the support she’s been getting from her family and community is overwhelmingly supportive.

It’s that support that’s strengthened the family’s resolve to rebuild after their first home was one of the more than 900 buildings destroyed by the Caldor Fire.

“We are rebuilding and we are going to get our lives back somehow. So I mean, and like that hat says, ‘Grizzly Flats strong,'” she said.

DeVos said her father left the Grizzly Flats area to stay with Esparza, and so far his house is safe.

The Caldor Fire’s been burning since mid-August. It’s 44% surrounded.