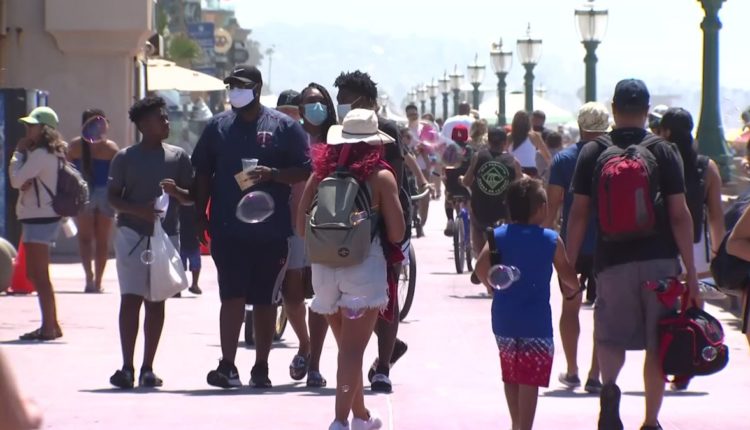 The busy holiday weekend was a promising sign for San Diego County businesses hoping for a boost after several down months during the pandemic.

San Diego Fire-Rescue estimated about 250,000 people were at our local beaches this weekend, and local business owners and employees say they felt the impact.

“We still had a few reservations available this week and it was more like last-minute reservations, which they did (snap) fill up,” said Alejandro Rodriguez, a front desk associate at Ocean Beach Hotel.

The travel and hospitality industries, the biggest variables in San Diego’s economy, were hit particularly hard by shutdowns and restrictions,

Rodriguez said the OB Hotel, which is just steps from the shore and at the foot of a busy street lined with restaurants and shops, saw its last room booked by Saturday.

“It’s good to see that the people are coming back,” he said. “They’re still taking precautions, whenever someone calls they always ask, ‘What’s the mandate?’ So it’s really good that people are taking that into consideration.”

As for the COVID threat, beach visitors were enjoying themselves, but not letting their guard down completely.

“You just gotta be safe. Wash your hands. Stay clean,” Arizona resident Michelle Lucenia said. She traveled west to San Diego to beat the heat, and also for “the beach, the food and the beer.”

NBC 7’s Artie Ojeda checked out the beech scene in Carlsbad and heard from San Diegans who said the holiday offered time to reflect.

Just steps away from the beach is Barbecue House Bar and Grill, where plenty of food and beer can be found. Owner Melvin Attallah said holiday weekends help lift the bottom line, and spirits inside the restaurant.

“Whenever we have a weekend like this, it really helps out, you know, just paying our bills and keeping our doors open,” he said.

Several families at the beach found time to share their feelings about the time off provided by the holiday, and how grateful they were for the positives in their lives.

“I think how lucky and blessed I am to be in San Diego and live here,” Nina Falge of Rancho Bernardo said. ” And how lucky I am that I can work on Labor Day in a country that has provided me so much opportunity.”

John Romano of Lakeside went for a dip in the ocean and came out to great news.

“When I went in I was a grandfather of one, and when I came out I found out via text- I’m the grandfather of two now! And I thought about it — How ironic. She was in labor on Labor Day!”

Attalah said if business remains consistent, he thinks he can return to pre-pandemic numbers by next summer.

Meanwhile, a bill to help local restaurants recover from pandemic losses is on its way to the Governor’s desk.

Senate Bill 314 would give businesses with outdoor dining space a year to apply for a permanent expansion. The legislation would also streamline the state’s alcohol licensing process by increasing the number of times a business can use a catering license at a single location.