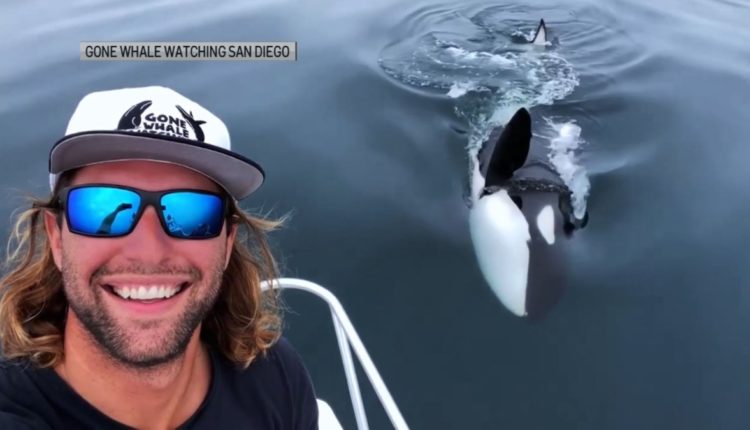 A team of San Diego whale watchers set out Tuesday to catch a glimpse of beautiful, majestic orca whales. After seeing two pods of another whale species of the coast of Ensenada, Mexico, they decided to count their chips and head back north.

It was on their return trip that the Gone Whale Watching San Diego crew got to play with the black and white beauties.

“Knowing the day was already a success, we made our way back north,” the crew posted on Facebook along with video of their encounter. “Suddenly, about 50 miles from home, Captain Dom began to scream. It was the kind of scream where nobody needed to hear the words to know what he saw: Orcas. We spent five magical hours with these Eastern Tropical Pacific Killer Whales.”

There they were. Frolicking, breaching and swimming about. One crew member even stopped to take a selfie with one of the orcas.

Included in the Facebook post was an explanation from the boat’s captain, Captain Dom, that their actions during the encounter were completely legal.

“The whales were quite the opposite of “harassed”, they were ENJOYING themselves!” he said.

The crew also witnessed the pod make a meal out of a dolphin, and speculated the kill may have been a training exercise of sorts for the young in the pod.

“Speaking of harassment however, the Orcas certainly harassed this poor Common Dolphin that they toyed with for nearly 90 minutes before finally completing the kill and sharing in a meal! It very well may have been a teaching moment for the youngsters in this pod! They’ll have to complete hunts themselves one day!” Captain Dom said.

Captain Dom described the encounter as one of the best trips in his company’s history, and he’s holding out hope the whales will one day make the trip up to San Diego as they’ve done in the past.