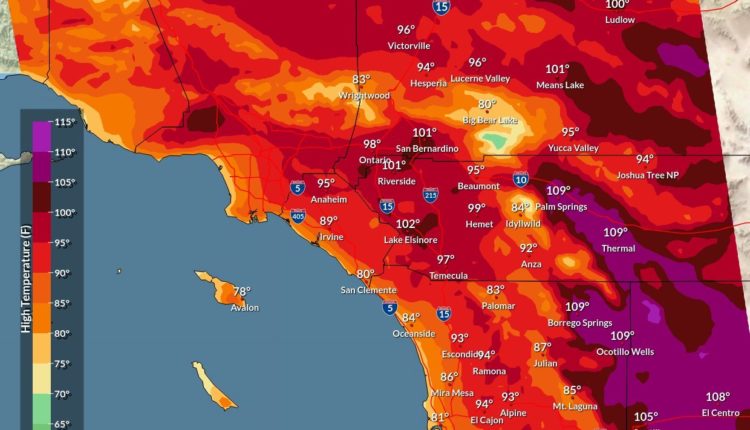 The marine layer was expected to become shallower and less extensive, with limited clouds and fog confined mainly to coastal areas, forecasters said.

A south swell was forecast to arrive at county beaches this weekend, elevating surf, and creating dangerous swimming conditions, the NWS said.

“Coastal areas and the San Diego valleys should largely escape the heat, although Saturday should be the warmest day for those areas as it appears a coastal eddy may develop for Sunday, lowering temperatures a few degrees,” the NWS said.

☀️ Happy Saturday! With temps on the rise this weekend, many may be heading to the beaches to cool off. Elevated surf and strong rip currents will develop and impact the beaches tonight through Mon night. Use caution when swimming and make sure you swim near a lifeguard!#CAwx pic.twitter.com/AXeC2pf1DK

The high pressure was predicted to shift east into the Great Basin on Tuesday, putting Southern California into a good position to welcome monsoon moisture back into the region, forecasters said.

Monsoon thunderstorms were likely to return by the middle of next week for the mountains and deserts ahead of a developing West Coast trough and cooling trend late next week.

Thunderstorms could return for the mountains and deserts around Wednesday and may continue through Friday.

For next weekend, a trough may develop off the West Coast, which would bring stronger onshore flow, a deeper marine layer, and cooler temperatures.

Hot conditions expected away from the coast this Labor Day Weekend. Sunday is forecast to be the hottest day of the weekend with highs up to 10 degrees above average in the Inland Empire. Make sure you stay hydrated and never leave people or pets in your car! #CAwx pic.twitter.com/MzhqOBooQJ