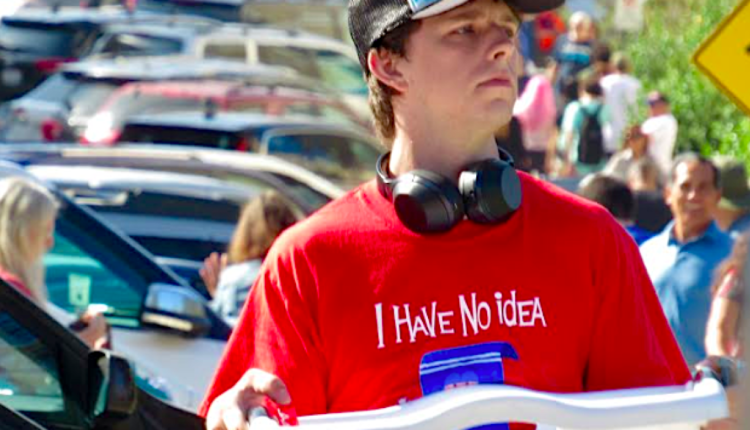 A beloved American tradition — parents dropping their kids off at college, then tearfully waving goodbye — will surge back to life this fall at San Diego County’s five major universities, revived by the steady decline of the novel coronavirus.

Thousands of dorm students were given the bum’s rush during the early days of the pandemic. Now, nearly 30,000 of them are preparing to move into campus housing in August and September at UC San Diego, San Diego State University, Cal State San Marcos, the University of San Diego and Point Loma Nazarene

The number would be far higher if more rooms were available, especially at UCSD and SDSU, popular schools that have reduced their housing stock in hopes that the social distancing it produces will minimize the chances that the coronavirus will stage a come back.

The change has angered the parents of a lot of UCSD students, where enrollment is soaring and there’s is very little affordable housing in neighborhoods close to campus.

There’s also a lot of exhaustion on all sides, and a strong desire for a return to normalcy.

After more than a year of taking classes online, often from their parent’s homes, “students are itching to get back on campus,” said Zara Irshad, editor of the UCSD Guardian, a school newspaper.

“There’s something about being surrounded by other students and having everything at your doorstep. You can walk to a dining hall, go get coffee, hit the library. A lot of students haven’t had the college experience and they want it.”

It’s a story that’s playing out nationwide. The demand for housing is so great at New Hampshire’s Dartmouth College that the Ivy League school is holding a room lottery. Winning students will be paid $5,000 to withdraw their housing application to make way for others.

At Southern Utah University in Cedar City, which is experiencing a growth spurt, many parents with extra bedrooms are opening their homes to students to help ease the strain.

These kind of difficulties seemed inconceivable 18 months ago at UCSD, where enrollment was approaching 40,000 after a decade of spectacular growth.

The university was nearly finished building a housing complex that would enable it to add 2,000 beds in fall 2020, pushing its campus housing to a record 19,500 beds.

Then the pandemic hit.

Over a roughly three-week period in March 2020, San Diego universities moved more than 20,000 students out of housing, with little notice. Like students nationwide, they had to quickly find a place to live and to switch to online classes, a shift that caused huge problems for faculty. Many had little or no experience in virtual instruction.

UCSD quickly created a huge COVID-19 testing program that enabled UCSD to keep the infection rate on campus at around 0.01 percent. The rate also stayed low because the school strongly enforced social distancing. At about that time, UCSD further determined that it should not be putting three students in rooms, which it had been doing to accommodate growth. It was causing congestion, with or without a pandemic.

UCSD later decided that it would house no more than 14,500 students in fall 2020. The pandemic petrified many students, and fewer than 10,000 showed up.

The pandemic is now fading, leading UCSD to increase its capacity to 17,500. But the figure won’t change in the short term, especially now that the Delta variant of the coronavirus has began to increase in some parts of California.

“Due to COVID-19 modifications, including de-densifying and reserving units for isolation and quarantine, the capacity for the 2021-22 academic year is 6,000 as opposed to our pre-pandemic capacity of 7,500,” the campus told the Union-Tribune in a statement.

The situation has created a lot of frustration for the parents of students, particularly those whose children are scheduled to begin their sophomore year at UCSD, which is likely to record another big jump in enrollment in September.

Parents were expecting that the university would guarantee housing for all sophomores — something the campus has been wanting to do. But UCSD announced early this year that it would not be possible to guarantee that it could accommodate all sophomores who wanted a bed. Many students prefer to live off campus by the time they are juniors.

My parents are upset about the resulting housing shortage.

“I think that UCSD could have done a lot more to find housing for students, including looking to partner with hotels in the area,” said Philippa Wainstein of Carmel Valley, whose son Sean is an incoming sophomore.

“My son could commute, but I don’t want him to. He’s been studying from home for 15 months and has missed out on the socializing that comes with being in the campus community. And students who live on campus their first couple of years tend to do better academically, and it helps them to become independent.”

Drew Papworth of Rancho Penasquitos, a sophomore at UCSD, did get a bed on campus for the fall. But his mother, Christi Papworth, says university officials have done a horrible job communicating with parents about housing, adding to everyone’s anxieties.

“Their hands might have been tied in what they could do, but they really didn’t explain what was going on,” said Christi Papworth a UCSD graduate. “There has been no compassion or guidance.”

UCSD said in a statement, “As in years past, the university does its best to accommodate as many students as possible who apply for on-campus housing.”

James T. Harris III, the president of the University of San Diego, also is reducing his school’s housing capacity — from 2,600 beds to 2,400.

He told the Union-Tribune: “We felt it would be best if we only had doubles (when it comes to occupancy). We found that students would feel most comfortable with only one roommate. We’re accommodating the student’s needs, and making sure they feel safe.”

USD made a second important change, one that is likely to please students. All undergraduate classes will be taught on campus, in person, this fall. Last year, most courses were taught online.

“There was a lack of joy last year,” Harris said. “People were worried about the health and safety of our community. Students were missing the personal interactions. But now I’m hopeful for the return of our students. I can’t wait to be with them.”