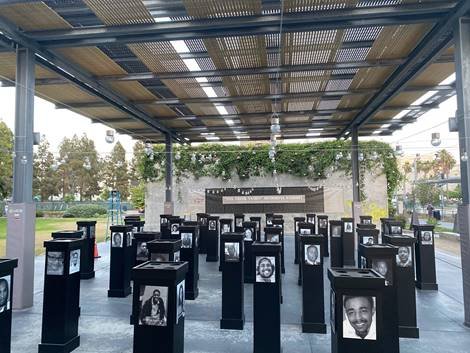 The exhibit is free to the public and will be open daily from July 10 through July 25. The exhibit is located on the Martin Luther King Jr. Promenade (200 W. Island Avenue) within The New Children’s Museum Park.

The memorial features 200 photos of Black victims, whose lives were lost due to racial injustice, police brutality and racism.

“This is definitely a teachable moment for all of us. We invite you to come, reflect and think about what you can do to make a difference,” Executive Director of SDAAMFA Gaidi Finnie said.

The Say Their Names Memorial is a nationwide, grassroots initiative honoring Black lives lost in the struggle against systemic racism. The memorial began in Portland, Oregon, spurring from the nationwide protests that began in 2020.

The photo memorial has been shown in over 25 cities from Hollywood, California, to Boston, Massachusetts. However, this is the first Say Their Names exhibit south of Los Angeles County.

Specific to San Diego, the exhibit honors the life of Demetrius DuBose, a former NFL player who lost his life on July 24, 1999, after being shot 12 times by two members of the San Diego Police Department.

The exhibit will also celebrate 16 of San Diego’s civil rights advocates who worked to level the playing field in San Diego.

SDAAMFA is working in collaboration with The New Children’s Museum hosting art activities designed to help children process their thoughts about the exhibit.