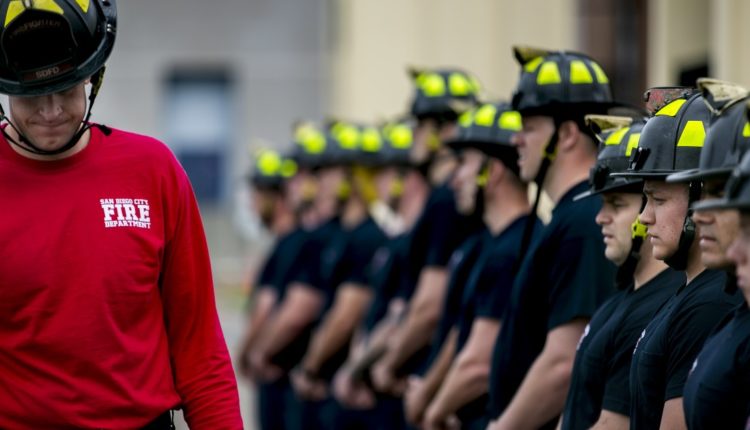 A new analysis shows firefighters in San Diego are still 95 percent male and 67 percent White despite efforts to recruit more women and minorities so that firefighters match up better with the city’s overall population.

City officials said a relatively diverse new fire academy launched last week shows they have begun to make progress, but they added that significant improvement is unlikely without the city devoting more money and personnel to recruiting efforts.

The new 30-member fire academy launched July 10 is comprised of 60 percent minorities and 30 percent women. Fire officials said 80 percent of the academy’s recruits are either female, an ethnic minority or both.

But that will make only a small dent in the disparities found in the new analysis, which shows that just 29 of the city’s 628 firefighters last December were women and that 207 were minorities.

Asians make up 16 percent of San Diego’s population but about 4 percent of city firefighters.

And the differences might be even wider because the police analysis covered all sworn officers, including higher-ranking officials, but the fire analysis only included firefighters. Fire officials said that’s because recruiting is focused on firefighters, not fire marshals, captains and chiefs.

A recent pay equity study showed that the main reason the city’s female workers make less than the city’s male workers is that males dominate the higher-paying jobs of police officer and firefighter.

Even though firefighters make more than most city employees, a compensation study completed last year shows that San Diego firefighters are relatively low paid compared to other firefighting agencies.

Relatively low pay will make it harder for the city to recruit minority firefighters at a time when they are in high demand by other agencies that also have begun focusing more on equity at the same time as San Diego, said Jesse Connor, president of the labor union representing city firefighters.

Connor told the City Council’s public safety committee on Wednesday that the union supports boosting the diversity of city firefighters. But he also stressed that all city neighborhoods get quality firefighting already.

“We live in and serve every community in San Diego and we strive to provide equal service to all San Diegans,” he said.

The city recently changed some requirements and screening policies to eliminate what officials call “artificial barriers to employment.” They said those changes will increase how many applicants get oral interviews after passing written exams.

Efforts to increase diversity come at a potentially ideal time. The Fire-Rescue Department recently launched an effort to hire more firefighters so that existing firefighters can work less overtime.

The city budget approved last month for the fiscal year that began July 1 includes $430,000 so the city can have three fire academies instead of the usual one academy.

Fire officials host a Girls Empowerment Camp every April for females ages 14 to 18. The girls are shown what it takes to be a firefighter.

They also host a Women’s Fire Prep Academy for women age 18 and up who have an emergency medical technician certification and a California driver’s license. Of the 22 participants in the March prep academy, six made it into the fire academy that began last week and 14 are slated for department interviews.

Capt. Jason Shanley, head of recruiting, said all the department’s recruiting efforts with young people should be viewed as “planting seeds” that officials hope will lead eventually to a more diverse firefighting force.

But Shanley stressed that more money and more personnel must be devoted to recruiting so the city can increase the number of visits to community colleges and high schools, where they make presentations on firefighting as a career.