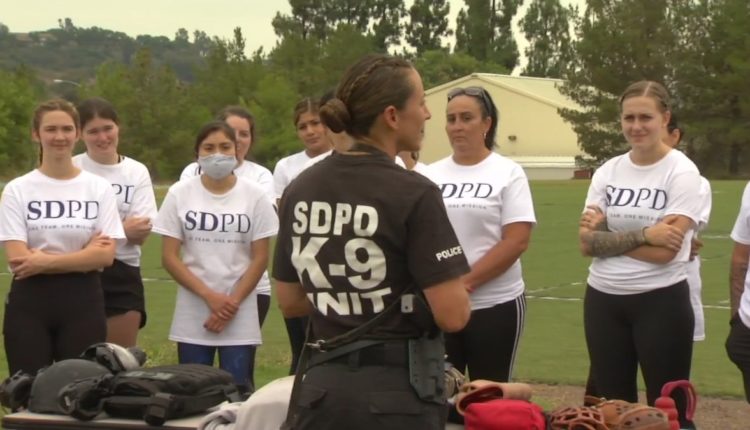 Many women got a taste of what it might be like to join the ranks of the San Diego Police Department.

Women were also given the opportunity to learn more about the SDPD’s hiring process and different job opportunities, and participate in some training exercises with SDPD officers.

“Women in general and being inclusive and diverse is an important value to the San Diego Police Department,” Sandra Albrektsen, assistant chief of SDPD said. “We’re not going to settle with being the highest [female] percentage in the nation. We’re already nearly 17% women, so it’s an impressive number but we want to continue to grow.”

Albrektsen said nearly 100 women from all over California signed up for the day’s event. One woman even drove eight hours, from Modesto, to attend the event, Albrektsen told NBC 7.

Officers on staff at the expo included female detectives, SWAT members and members of the SDPD Canine Unit.

“The female officers here are superheroes in my mind. We have women from three years to more than 30 years of service here today to help support our efforts,” Albrektsen said.

“This expo is exactly the type of event we need to bring greater diversity to our police department and help talented women enter and succeed in a historically male-dominated field,” Gloria said.

“Thank you to everyone who showed up to SDPD’s first Women’s Hiring Expo and to all who made this event possible!” Nisleit said in a tweet.

Over 50 women from SD, OC, LA, Las Vegas, and even Modesto woke up early today and said, “I want to see what it takes to be one of America’s Finest!”

Thank you to everyone who showed up to SDPD’s first Women’s Hiring Expo and to all who made this event possible! pic.twitter.com/rNjH3DVXHf

Albrektsen said more events like this are planned and anyone interested can connect with SDPD on social media.

“We are open and willing and wanting anyone to sign up or come explore with us. Get ahold of our Backgrounds and Recruiting Unit,” Albrektsen said.