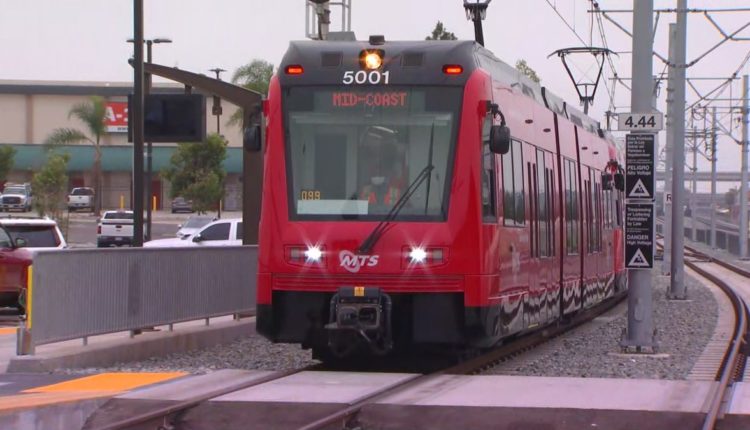 An ambitious transportation project that extends one of the trolley lines in San Diego County will reach a milestone Tuesday as city leaders hop on for the first ride.

City and transportation leaders will take a ride on the Mid-Coast Extension of the UC San Diego Blue Line – covering the southern end of the extension – which includes Tecolote, Clairemont, and the Balboa Avenue stations.

The San Diego Metropolitan Transit System said this early-morning Tuesday ride signifies successful testing of the trolley extension and means the longtime project is one step closer to its full reopening on Nov. 21, 2021.

Some familiar faces will be on the trolley Tuesday, including San Diego County Supervisor Nathan Fletcher, San Diego Mayor Todd Gloria, and U.S. Senator Alex Padilla, to name a few of the leaders.

The first test run of the project’s new tracks took place in late June. There was a lot of applause that day as an oversized key was handed over from SANDAG to the MTS as a symbol of the beginning of the trolley’s testing phase.

The Mid-Coast Trolley reached a major milestone when it successfully tested its first run on its new tracks. NBC 7’s Audra Stafford has more on the momentous occasion.

Before that, this past April, SANDAG leaders gathered to celebrate the final stretch of construction in the area shaping up to become the new UC San Diego Health La Jolla Trolley Station at the intersection of Voigt and Campus Point drives, across from the Preuss School.

“Having this trolley providing access to our South Bay, East County communities who can now get here by rail rather than by car, it creates a whole level of opportunity that doesn’t currently exist,” said San Diego Mayor Todd Gloria about the Mid-Coast Trolley Project back in April.

The Mid-Coast Trolley Project reached a milestone and to celebrate, local leaders gathered to highlight the achievement. NBC 7’s Audra Stafford has details.

By the way, another test ride like the one happening on Tuesday goes down this Saturday, only that one will be for the general public.

The public is invited to take the same route during a community celebration from 10 a.m. to 1 p.m. dubbed the Mid-Coast on Morena Community Appreciation Festival. The event will be held at 1364 W. Morena Boulevard (near the Tecolote Trolley Station); it’s free and you can register for your ride ahead of time here. Bring your face mask, as masks must still be worn on public transit like the trolley.

One of the largest infrastructure projects in San Diego history is heading to its final project. NBC 7’s Audra Stafford has more information on the Mid-Coast Trolley Project.

The Mid-Coast Trolley Project: Almost There

“When we have this line under operation, you’ll be able to go from the border all the way through downtown and all the way up to University City on a one-seat ride,” said SANDAG Deputy Project Director Greg Gastelum this past April.

It’s been a long road for the $2.1 billion Mid-Coast Trolley Project.

A priority of the San Diego Association of Governments (SANDAG), it is one of the largest infrastructure projects in San Diego’s history. The extension of the Trolley line aims to improve regional transit access to major educational, medical, and employment areas.

Construction began in fall 2016. Service is expected to be up and running by late November 2021.

Funding for the project was included in the voter-approved TransNet measure, a local, half-cent sales tax hike that supports transportation projects. It’s part of the TransNet Early Action Program, meaning it’s one of the highest-priority projects in the region.

To learn more about the project and each step along the way, visit this website.

San Diego’s Mid-Coast Trolley Expansion Project is set to be completed by the end of the year. Construction has been going on for a long time, and it has helped bring a lot of jobs — even for small businesses. NBC 7’s Ashley Matthews explains.