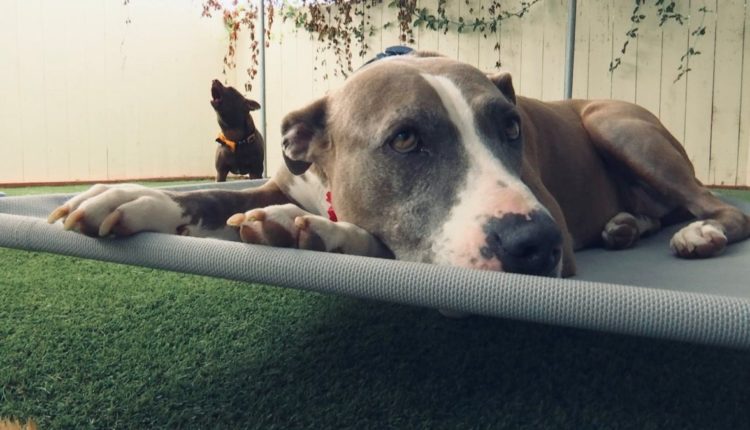 Cam and Count act like your stereotypical married couple. Camry is calm and laid back. Count is loud and full of energy. Oddly enough, they bring out the best in each other.

Camry is a gentle seven-year-old pit bull mix. She was really shy until the folks at the Rancho Coastal Humane Society partnered her with Count Chocula. He’s an energetic three-year-old chihuahua mix. Camry helps calm him down.

Van Zante said they’re being offered as a pair for a discount during Clear the Shelters, the annual event where local shelters team with NBC 7 and Telemundo 20 to find homes for hundreds of pets.

“People who maybe have been thinking about getting a pet, with Clear the Shelters they go, ‘Maybe now is the time,’” said Van Zante, the spokesperson for Rancho Coastal.

He said there is nothing quite like watching someone adopt one of their animals.

“Still, every single time, you feel it here. It makes your eyes sweaty,” he fought back tears. “It never gets old and it’s still the best part of the job.”

He said Camry and Count Chocula are not a bonded pair, but they’d like to see them adopted together. The adoption fee is usually $145 for an animal and it includes all the medical exams, vaccinations, spay or neutering, microchip, and one-year license. Rancho Coastal is offering both for only $170.

“Clear the Shelters saves lives,” he said, and he’d like to see Camry and Count Chocula be saved together.

Find a Participating Shelter Near You or to donate click HERE

This year’s Clear The Shelters will again feature online donations through fundraising partner Greater Good Charities. Those interested in donating to a participating shelter or rescue can visit the Greater Good Charities’ donation site during the campaign at ClearTheSheltersFund.org, which will also be accessible via ClearTheShelters.com. Hill’s Pet Nutrition is the national sponsor for its fourth Clear The Shelters campaign this year.

Virtual pet adoptions are also returning for the 2021 campaign through partner WeRescue. The WeRescue app enabled users to locate adoptable pets in their area, submit their adoption applications, and ask questions directly to shelters. iHeartDogs, a previous Clear The Shelters partner, will again donate needed pet supplies to select shelters this year. Leading social media animal brand The Dodo will again serve as a media partner.