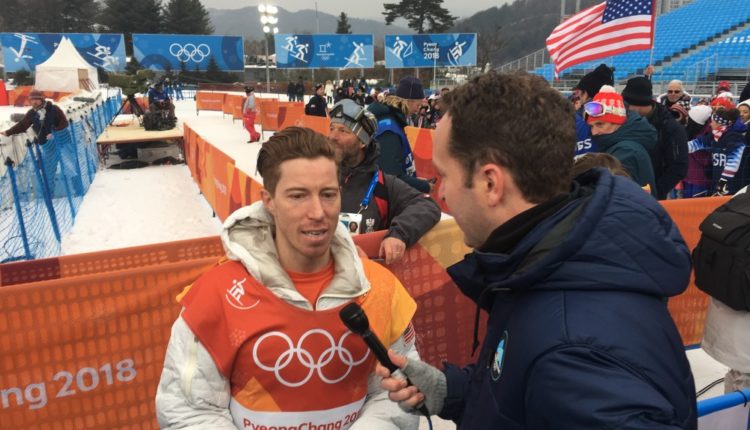 Steven Luke interviews Shaun White at the Winter Olympics in South Korea in 2018.

KNSD-TV NBC 7 San Diego anchor and reporter Steven Luke heads to Tokyo on Friday to cover the Games of the XXXII Olympiad.

Between July 23 and Aug. 8, from the opening to closing ceremonies, Luke is scheduled to report live on NBC 7’s morning news program, airing from 4:30 to 7 a.m., along with the 11-11:30 p.m. newscasts. He also is planning to post daily updates on Facebook, Instagram and Twitter. He is part of a team of NBCUniversal journalists from NBC owned-and-operated stations.

“The bulk of my time will be devoted to San Diego coverage,” Luke told Times of San Diego. “Covering the Olympics is one of the most favorite things about my job. Our coverage of Tokyo will be the most in-depth ever.”

This will be Luke’s sixth Olympic appearance for NBC 7. He has been reporting on local Olympics connections and storylines since 2003, including trips to Torino (2006), London (2012) and Rio de Janeiro (2016), as well Winter Olympics in Sochi in Russia (2014) and Pyeongchang in South Korea (2018). He’s been on the air with the station since August 2002.

“I have a ton of memorable moments, including watching Shaun White, Michael Phelps and Simone Biles win gold medals,” said Luke. “My all-time favorite moment was be there to watch Usain Bolt win the 100-meters in London.

“My most unusual time was in Sochi when our computers were all scrambled by so-called outside forces. When we arrived in the country, we needed IT help from internal NBC folks. They had built new hotel towers for the games. When I arrived at my hotel room, I took a shower and realized there were no towels. So, I used the bedspread. I’m expecting they will have towels in Tokyo.”

Prior to the Games, Luke has produced a 10-episode podcast about San Diego’s top Olympians. The podcast, called “Olympic Dreams: San Diego to Tokyo,” is available on all major podcast platforms.

The Tokyo Olympics was scheduled to be held last year in 2020, but was postponed until this summer because of the COVID-19 pandemic. A recent surge in coronavirus cases has led Japanese officials to ban spectators in the stands for the first time in the history of the Summer Games.

“The Tokyo Olympics have been a light at the end of a very long tunnel for many of us,” Luke said. “While I’m not looking forward to the quarantines and strict COVID protocols, I know these Olympics will be both historic and memorial.”

In addition, Telemundo will air more than 300 hours of Spanish-language coverage and NBC Sports Digital will provide a whopping 5,500 plus hours. Also, the company’s streaming service Peacock will be offering four studio shows.

In terms of digital, NBC Sports Digital will stream programming on its website and the NBC Sports app, including all 41 sports and 339 medal events plus the Opening and Closing Ceremonies and medal ceremonies.

A full-day of Olympic programming is scheduled for the first day, Friday, July 23. The day will begin with the network’s first-ever, live morning broadcast of an Opening Ceremony, followed by a special edition of “Today.”

The company also has promised to cover new sports and events, including skateboarding, three-on-three basketball, BMX freestyle, surfing, sport climbing and karate, as well as the return of softball and baseball.

“After a devastating year, the world comes together again, finally, in Tokyo this summer,” Molly Solomon, executive producer and president, NBC Olympics Production, said in a statement. “We are going to deliver the most comprehensive and accessible coverage for any sports event in history. The depth and breadth of our broadcasts will be unprecedented, showcasing once-in-a-generation athletes and storylines that will capture the incredible uniqueness of these Games and our times.”

Nuffer, Smith, Tucker, a San Diego public relations firm, has announced that Dylan Lomanto, with experience working in California agriculture, has been hired as a government relations and public affairs specialist.

Lomanto previously served the past three years as a legislative aide for California Assemblyman Robert Rivas (D-Salinas), who served on the Assembly Agriculture Committee. Lomanto supported the assembly office on agriculture, water and natural resources issues, as well as regulatory and policy issues linked to agriculture.

NST said Lomanto will work on a variety of accounts, including the California Citrus Pest & Disease Prevention Program, administered by the California Department of Food & Agriculture, and Food Foresight, a trends intelligence system designed for the agri-food chain.

“My deep understanding of California’s agricultural landscape is rooted in a personal passion and connection to the land, having grown up on a walnut farm in Hollister,” said Lomanto. “I still go back home every fall to help my family harvest, and I’m eager to bring my practical comprehension of what it takes to cultivate a crop, along with a unique understanding of agricultural policy to NST and its impressive roster of clients.”

“Dylan’s distinct experience at the cross section of government and agriculture provides a unique set of skills and strategies he can apply in support of our clients,” said Teresa Siles, NST president and partner.  “There is no question that his expertise and perspective provide significant value to our agriculture and government agency partners as they navigate issues and build on opportunities.”

inewsource, a San Diego online investigative news service, has hired veteran journalist and editor Mark Rochester as managing editor. He succeeds the retiring Laura Wingard, who has served as inewsource’s managing editor since 2017.

Most recently, Rochester was editor-in-chief at Type Investigations, headquartered in Manhattan. He previously was senior news director for investigations at the Detroit Free Press. He has held senior leadership positions at the Pittsburgh Post-Gazette, The Denver Post, Newsday and The Indianapolis Star.

According to a inewsource statement, Rochester’s work has inspired federal and state legislation, congressional hearings, regulatory reviews, criminal prosecutions and the exposure of corporate misconduct.

As a senior manager for Associated Press in San Francisco, inewsource said Rochester led computer-assisted reporting training efforts around the West, both inside and outside of AP, and conducted a widely used analysis of the $74 million in campaign contributions that went toward the California gay marriage ballot initiative in 2008. The AP analyzed who gave and why and then made the data available to member newspapers. The resulting series of stories based on the data was AP’s 2009 Pulitzer nomination for Local Reporting.

Rochester serves on the national board of directors of the Investigative Reporters & Editors, a 6,000-member international organization dedicated to improving investigative journalism. Rochester is the first Black journalist to serve as IRE board vice president.

“We are thrilled to welcome Mark to the senior leadership team at inewsource,” said Lorie Hearn, CEO/editor, inewsource. “Mark has a reputation for guiding and producing high quality journalism that creates positive change. We look forward to working with him on an ever-more ambitious agenda for serving and listening to the diverse communities in the San Diego and Imperial County region.”

“I’m really looking forward to joining the inewsource staff, which is already doing such terrific watchdog reporting and data analysis,” Rochester said. “They all embrace the mission of making communities better through powerful journalism, and that’s what I’ve always believed in.”

Founded in 2009, inewsource is a nonprofit that produces content for the web, radio and television in partnership with KPBS and KFMB-TV CBS8. The news organization, whose legal name is Investigative Newsource, is funded by individual contributions and foundation grants.

The first-place award was presented in the non-for-profit campaign category, the station said. The video was titled “Stand Up for Logan Heights CDC.”

“We are passionate about serving the communities where they live, learn and work,” said KOCT executive director Carly Starr Brullo-Niles, who directed the video. “We help by giving our knowledge, time and resources to support residents and businesses in the greater Logan Heights neighborhoods. We strive to development and implement tangible, substantial solutions that can improve lives for the better.”

The city of San Diego recently announced it would not to renew a management contract with the Logan Heights CDC after complaints from property owners about poor service and resistance to public criticism during meetings.

For more than 20 years, the Logan Heights CDC, one of 64 maintenance assessment districts in the city, had previously been responsible for neighborhood sidewalk sweeping, trash collection, tree trimming, graffiti removal and other services that go beyond what the city provides. The city said it will manage the district and another nonprofit, Urban Corps of San Diego County, will provide services to Logan Heights.

Founded in 1984 as a non-profit corporation, KOCT provides a voice in the North County for programming about non-profit and community groups. Partially funded by the city of Oceanside, KOCT also serves as workforce development with volunteers and interns who have gone on to work in commercial broadcast, film and online entities. On Cox Cable, KOCT operates Channel 18 for arts, culture and educational programming and Channel 19 for history and city government programming.

Rick Griffin is a San Diego-based public relations and marketing consultant. His MarketInk column appears weekly on Mondays in Times of San Diego.