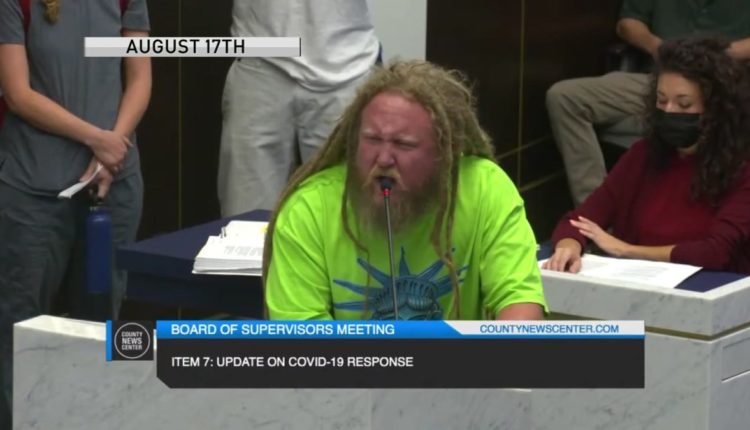 It was one of August’s biggest local stories: A fiery and historically long Board of Supervisors meeting capped with a midnight vote making San Diego County the first in the nation to declare COVID-19 misinformation a public health crisis.

Hundreds of San Diegans spoke before the board at the Aug. 17 meeting, many of them impassioned and angry, lodging insults and, at times, threats at government officials.

One nonprofit proudly claims credit for rallying more than 260 of those speakers – Reopen San Diego.

After a 15-hour-long meeting with much opposition and heated remarks from members of the public, the San Diego County Board of Supervisors voted 3 to 2 to declare COVID-19 misinformation “a public health crisis.”

In an effort to better understand the group, how it was formed and what it aims to accomplish, NBC 7 Investigates sat down with one of Reopen San Diego’s co-leaders, Amy Reichert.

“Everything happened really fast,” said Reichert sitting outside her house in La Mesa Thursday morning. “It was Friday that County Board of Supervisors Chair Nathan Fletcher decided to add agenda item 19 declaring that misinformation was a public health crisis. So we literally sprang into action from Friday to Tuesday.”

Through social media and email newsletters, Reichert says Reopen San Diego spread the word encouraging people to show up at the meeting and speak out.

“And it was just an overwhelming response,” Reichert said.

Reichert said they got more than 260 people to sign up for what wound up being more than eight hours of public comment. The vast majority vehemently opposed the misinformation agenda item, though some used misinformation in their arguments.

We asked Reichert about the speakers who made false statements and threats.

“We asked people in a couple emails leading up to Tuesday, ‘Please be respectful. Please don’t do anything that will discredit us,’” Reichert said.

While she says the group does not condone violence, Reichert said member opinions do vary widely.

That said, she says she is wary of misinformation, and regularly fact-checks members. She shared an email thread with NBC 7 Investigates between her and a member, in which she tells him an article is outdated and not true.

“Right now the number one concern with people in Reopen San Diego is mandates coming down, saying, ‘You know what, you’re going to lose your job unless you submit to this medical mandate and get a vaccine,’’ Reichert said.

Reichert said she is choosing to wait on getting a COVID vaccine – citing apprehensions over the fact that it is the first vaccine made with mRNA technology. However, she said she has every other recommended vaccine, as do her two children, and gets the flu vaccine every year.

Reopen San Diego initially started as a social group for mothers and kids during the shutdown.

“We created this safe community where we could be connected and our kids could play,” Reichert said.  “At first all we really did was get to know one another. It was not about activism at all.”

That changed during the lockdown last November. The group has since organized business owner meetings, rallies, marches and public meeting engagement. Reichert estimates a combined social media and email following in the tens of thousands.

“It was amazing the kind of response that we had,” said Reichert. “We found people feeling the same way we were – questioning, just honest questioning, about what going on.”

Reichert said none of Reopen San Diego’s leaders profit from any of the donations. The group has $15,000 dollars in its bank account – which she said they spend on permits, tents, t-shirts, website and email server fees. She also says Reopen San Diego is not supported by any political party – and has never received any donation from a political party.

Do You Know Who Killed This Man in El Cajon? – NBC San Diego