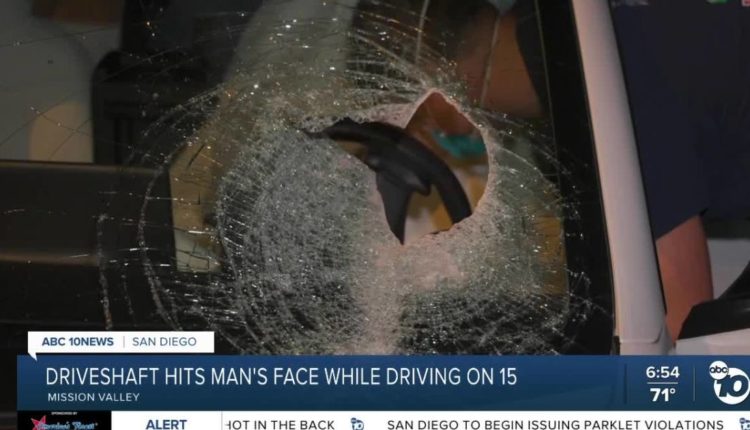 SAN DIEGO (KGTV) — A Tesla driver was hospitalized Tuesday morning after a metal driveshaft flew into his windshield and struck him in the face as he drove on Interstate 15 in the Mission Valley area.

Just before 5 a.m., San Diego Fire-Rescue firefighters had just returned to Station 45 on Friars Road when a white Tesla drove onto the driveway with a hole in the windshield.

The driver got out of the car with visible facial injuries and told the firefighters he was traveling north on I-15 near Friars Road when the driveshaft from another vehicle suddenly crashed through the glass.

After flying through the windshield, the object hit the driver in his face, struck a headrest, and broke glass on the Tesla’s roof, the driver told the fire crews.

ABC 10News learned the driver was taken to the hospital for treatment, but the severity of his injuries is unknown.

No information was available on the vehicle that lost its driveshaft.