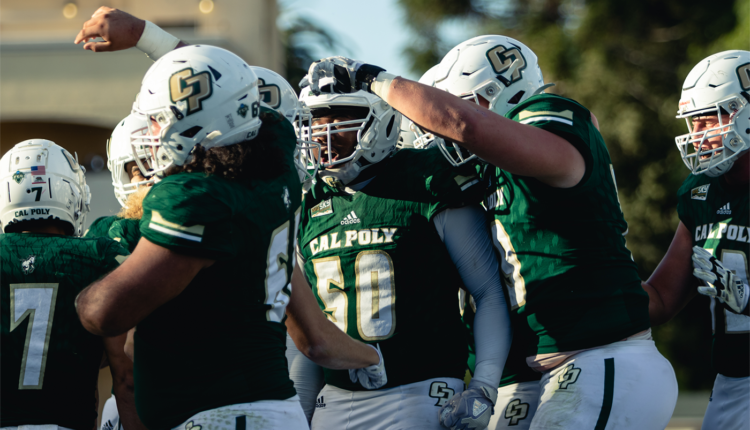 Cal Poly football won their opening game of the season against the University of San Diego Toreros 28-17 on Saturday, Sept. 4 inside Torero Stadium.

San Diego (0-1) could not protect their home field as Cal Poly (1-0) picked up the win in their first of two consecutives road games to kick off the year. This was a welcome sight for the Mustangs, who went 0-3 last year in the shortened season, before having their final three games canceled.

Redshirt Sophomore quarterback Spencer Brasch earned the starting quarterback job after training camp saw a competition for the spot. After transferring from Cal earlier this year, Brasch made his first appearance for the Mustangs and did not disappoint.

He passed for 318 yards and two touchdowns, while completing 61% of his passes. This win was a team effort, as the Mustang defense came to play as well, recording the only two turnovers on the day – both interceptions.

San Diego received the opening kickoff, and the game opened quickly with 18 of the game’s 27 drives all coming in the first half, and 10 of them in the first quarter. However, the scoring didn’t start until both teams had two short drives each, including three 3-and-outs.

The Toreros struck first with a 1-yard rushing score with just under seven minutes in the first quarter, putting them up 7-0.

On the very next drive, the Mustangs answered back with a five play touchdown drive of their own. Redshirt sophomore running back Shakobe Harper capped the drive with a 2-yard rush into the endzone, but the play of the drive came on a 45-yard pass from Brasch to redshirt freshman wide receiver Michael Briscoe.

The first quarter would end with the game tied at 7-7.

Cal Poly had possession when the second quarter opened, but two quick incompletions forced a punt.

On the ensuing San Diego drive, the Mustangs came up with the first turnover of the game when redshirt junior linebacker Laipeli Palu intercepted Torero quarterback Mason Randall. However, the Cal Poly offense couldn’t turn the interception into points on offense.

After another defensive stop by the Mustangs, they made two huge back-to-back plays on offense to get back into the endzone. Brasch completed a 31-yard pass to graduate wide receiver Chris Coleman on a 3rd and 16 to keep the drive alive and move the ball down field.

On the very next play, Brasch went back to Coleman for a 35-yard score to take the lead 14-7, a lead they took into the halftime locker room.

The second half opened with a more meticulous start from both teams. Cal Poly started with the ball and ate 4:15 off of the play clock, driving down to the San Diego 17 yard line. The drive ended with a missed field goal attempt, giving the ball back to the Toreros in their own territory.

San Diego then responded with a 17-play, 77-yard drive that took nearly nine minutes off the clock, which resulted in a successful 25-yard field goal, cutting the Mustang lead to 14-10 going into the fourth quarter.

The Cal Poly offense answered right back as Brasch recorded his second touchdown pass of the day to redshirt junior wide receiver Xavier Moore to cap off a 66-yard drive. Moore’s first score of the year gave the Mustangs a 21-10 lead with 14 minutes to go.

On the next drive, San Diego worked the ball down to the Cal Poly twenty five yard line before redshirt freshman Elijah Ponder intercepted the Torero quarterback and returned it back for a Mustang touchdown.

The 75-yard pick six was the nail in the coffin that led to the Mustang victory. San Diego scored a late touchdown to keep the score close, but the Mustangs ran out the clock to secure the 28-17 victory.

Although Cal Poly came out on top, San Diego had the edge in total yards (425-362) and first downs (27-18). Their style of play also helped the Toreros dominate in time of possession, holding the ball for 38:15 compared to the Mustangs, who only had their offense on the field for 21:45.

Cal Poly will look to add a second consecutive win to their schedule when they face off against the Fresno State Bulldogs Saturday, Sept. 11 in Bulldog Stadium.