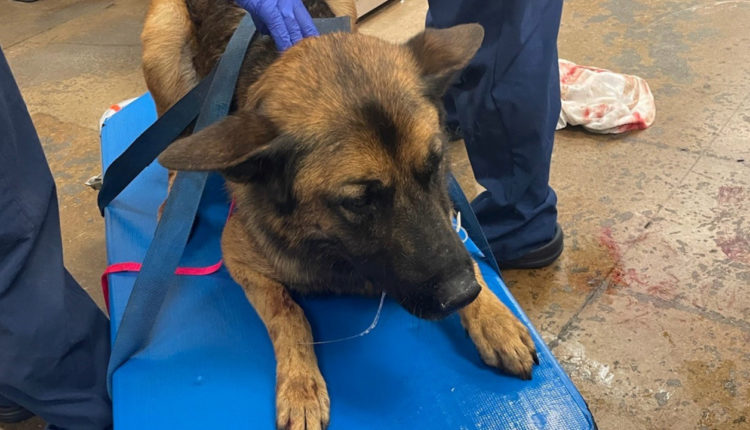 A K-9 with the San Diego County Sheriff’s Department was shot and wounded in Murrieta while authorities tried to apprehend three armed robbery suspects over the weekend, police said Tuesday.

The incident began late Saturday night, when a witness told a deputy that a 7-Eleven in Lakeside had just been robbed, according to the San Diego County Sheriff’s Department. The deputy followed the suspected robbers and tried to pull them over, but the assailants wouldn’t stop, triggering the chase.

Around 12:20 a.m. Sunday, Murrieta police were dispatched to help California Highway Patrol officers who had taken over the chase by then.

The pursuit vehicle was traveling on the 215 Freeway and exited Los Alamos Road, at which time the assailants opened fire at officers involved in the chase, according to a Murrieta Police Department news release.

After firing multiple rounds, the vehicle entered a Shell gas station on Los Alamos, where three occupants got out and tried to carjack a nearby vehicle at gunpoint, the release stated.

San Diego sheriff’s K-9 Cezar was deployed to stop the carjacking and one of the assailants shot the dog in the leg, police said.

“Cezar was shot while trying to stop a suspect from carjacking people at the end of the chase. He likely kept the suspect from getting away & possibly hurting others,” the Sheriff’s Department tweeted. “Cezar did as he was trained. He protected his deputy handler, the public and our law enforcement partners.”

Two of the robbery suspects were taken into custody right after the shooting.

The third wanted individual fled the area on foot but was later apprehended by a SWAT team, with the help of a Murrieta police K-9. The police dog injured the assailant, who was transported to a hospital for treatment of unspecified injuries, according to the release.

Police did not identify the robbery suspects.

K-9 Cezar was taken to a local veterinary hospital, where a vet surgeon removed bullet fragments from the dog’s leg. He was released around 11 a.m. Sunday and is expected to be OK.

1/5 K-9 Cezar being wheeled into surgery after valiantly protecting his handler @SDSheriff Deputy Avedisian and the public following a robbery and chase from Lakeside to Murrieta. At some point, the suspects started shooting and Cezar was hit in the leg. pic.twitter.com/tSP9SFrZdM

San Diego Pledged To Shift Away From Cars. So Why Is It Still Widening Roads? (KPBS Midday Edition Segments) – KPBS