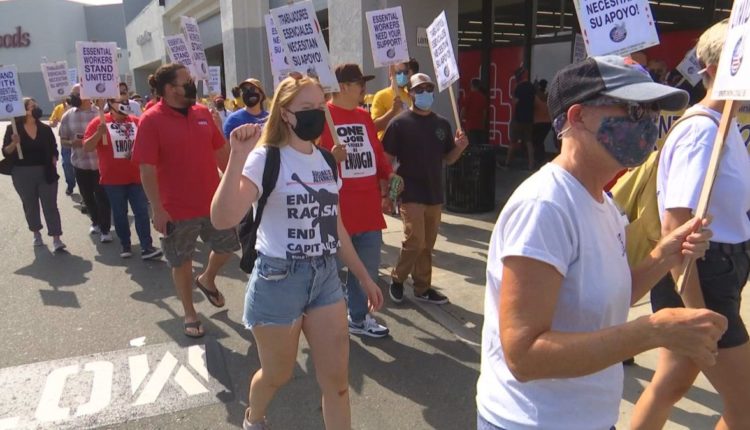 While thousands of San Diegans swarmed to the beach for Labor Day, a few dozen chose to march in front of a CVS in the Midway District to support their fellow workers.

McGee was one of about 100 people in front of the CVS Monday. His UFCW Local 135 said it is fighting for better pay and better benefits for CVS workers throughout California.

“We’re at the point where we have to show them that we’re really serious about this,” McGee said.

A CVS spokeswoman sent NBC 7 this statement: “CVS Pharmacy has a long-standing, productive relationship with the UFCW Local 135, which represents many of our store colleagues. We’re currently negotiating a collective bargaining agreement with this union and we look forward to finalizing a new agreement.”

“If you’re going to talk about us being essential workers, then you need to reward us as such,” argued Jim Miller, Ph.D.

Dr. Miller teaches Labor Studies at San Diego City College and decided to join the march on his day off.

“I’m here today to honor American workers by taking part in this solidarity action with the UFCW workers,” he said while dozens of people marched in front of the store.

Miller argued it was the best way to spend Labor Day.

“It’s important because the American labor movement, those are the folks that brought you the three-day weekend that you’re celebrating,” he said.

“This is the one day in America we’ve decided that we come together as a country and celebrate the common, everyday laborer, the worker,” agreed McGee. “Labor is not just the 30 people inside your store. Labor is millions and millions of people across the country.”

McGee said negotiations are set to resume between the union and CVS this Wednesday.