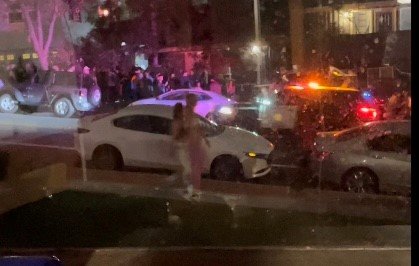 Students returned to campus at San Diego State University on Monday under new COVID-19 protocols requiring everyone on campus to be vaccinated, but while campus activity seemed to go off without a hitch, it’s what happened off-campus over the weekend that’s causing a buzz.

“Out of Control.” College Area residents fuming after wild Saturday night back to school parties near SDSU. The university sent letters home to parents reminding them that students must follow code of conduct. This video shows large party on Campanile Dr. #nbc7 pic.twitter.com/KxafSE3YhI

The university sent a letter to parents reminding them of the student code of conduct after “behavior off-campus that threatened the health and safety of members of our San Diego State University community.”

The letter is in reference to several College Area parties Saturday night that have left long-time residents frustrated.

“It was just an absolute young-adult, teenage free-for-all,” said Susan Hopps-Tatum. “There were hundreds of students all surrounding the neighborhoods.”

Cell-phone video of a party on Campanile Drive, which is south of the university, shows dozens of students outside of a home as several police cars pass by without taking any action.

At another nearby party, a 16-year-old was shot, though the university is disassociating itself from the incident, saying its students were not involved. The teenager’s injuries are not life-threatening.

Meanwhile, students and residents say fireworks were being set off during the night, creating a serious fire hazard.

“Fireworks went off everywhere, cops everywhere, students everywhere, just a lot of commotion from all sides,” said student Denise Diaz, who lives nearby.

College Area residents were fearful of a bad night since it was the return to school for students who spent most of last year learning virtually.

“The parties were bad before, and we knew that the parties would be bad once they came back,” resident Jean Hoeger said. “And they are.”

Neighbors expressed frustration that no pre-emptive action was taken to control the parties.

“We were very surprised that both SDSU and SDPD were seemingly woefully underprepared for this, because we’ve been pushing this for weeks,” Hoeger said.

Hopps-Tatum said she tried to call police to advise them of the parties, but by the time anyone responded, the parties had escalated out of control.

“We tried calling police, and the intake officer actually apologized to me and said, ‘Listen, there are so many party calls in that community right now that we don’t know when or if the police will ever get there,’ ” Hopps-Tatum said.

“In response to the reports, the San Diego State University Police Department (UPD), in communication with the San Diego Police Department (SDPD), is visiting the homes where any gatherings were reported to take place to deliver official cease-and-desist letters that outline consequences and reinforce expectations. We continue to work closely with our partners in SDPD law enforcement to further enhance and ensure their timely support of these response efforts given the off-campus locations. SDSU will continue to monitor and follow up with any students identified to live at these locations. We will also begin the conduct process in all situations where our student code of conduct policy allows for us to do so. This will be addressed at both the individual and organizational (e.g. a registered student organization) level as appropriate.”

The letter sent to parents said off-campus behavior threatened the health and safety of members of the San Diego State community:

“Although not all social behavior reported and observed involved SDSU students, and not all SDSU students were involved, we are committed to holding students accountable for their participation in last night’s events as they are identified,” the letter stated. “The behavior of some SDSU students last night is inconsistent with our community values and is unacceptable.”

A neighbor said the home on Campanile Drive, where one of the parties took place, is owned by an out-of-state investor who rents out rooms to students every year.

NBC 7 has reached out to the San Diego Police Department for their accounts of what happened over the weekend. So far, they have not responded.

“The lack of respect from the students this year — the entitlement for partying and doing whatever they want to do — is off the charts,” Hopps-Tatum said. “Like I said, it was like a riot scene. I was begging the police, because I knew somebody was going to be injured.”