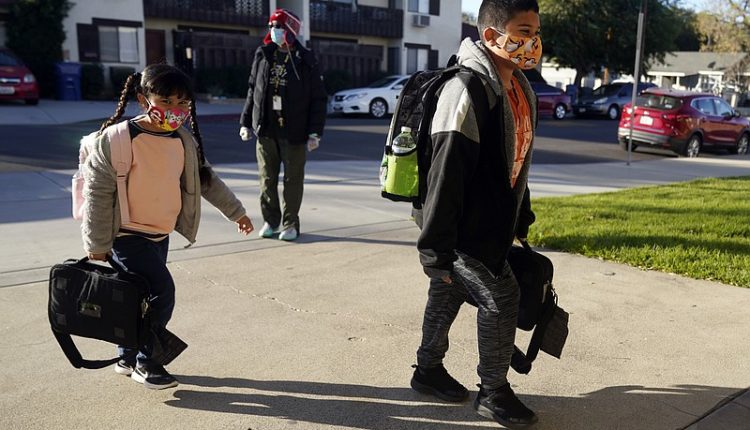 Changes to how masks will be enforced at school

we’ll get more on that next, But first… let’s do the headlines….

The county board of supervisors voted unanimously to extend a contract to keep San Pasqual Academy open through June of 20-22. The escondido campus for foster youth was slated to close in October due to a loss of federal funding and declining enrollment.

A new San Diego study of more than one thousand of the nation’s counties finds black, asian, and latin neighborhoods are frequently hotter than predominantly white neighborhoods.

“you can’t just have everything. I mean, on the one side, we want tighter cities where we don’t need that much land. On the other side this kind of impact you, it impacts air quality and all of these things. the same with vegetation. On the one side in San Diego we want to have all of this vegetation to cool down the city. on the other side it needs water so there are always these tradeoffs that we need to decide.”

Almost as if to nod to shark week, there’s been sightings of juvenile white sharks in Del Mar.
Dr. Chris Lowe is the director of the shark lab at Cal State long beach. He’s working with Del Mar lifeguards on tracking and tagging sharks for research.

sharks 2a “we have no idea where they go so now that we’re tagging baby sharks with transmitters that last 10 years we are starting to figure that out.”

Not to panic surfers, but DR. Lowe says he thinks a group of juvenile white sharks has made del mar their new home. He says they’re less aggressive, but that swimmers and surfers should hit the water in groups.

Despite pushback from some parents, California will still require masks for K through 12 schools in the fall. But what is changing is how that mask mandate will be enforced. The state says it will now allow school districts to decide how to enforce the rules. KPBS’ Alexandra Rangel has more on what that means in San Diego.

Valdyn Trujillo, 3rd Grader
“It’s because you can’t breathe or nothing in the mask.”
Valdyn Trujillo, a third grader at Zamorano Elementary Fine Arts Academy in), isn’t too happy about wearing a face mask to school, but he understands why it’s required.
Valdyn Trujillo, 3rd Grader
“Today there was someone who tested positive in school, but they sent him home and sanitized.”
California Health Officialsare following the CDC on guidelines for schools. While students will not have to social distance, they will be required to wear masks. School districts can decide how to enforce the mask mandate.
Richard Barrera, San Diego Unified School Board President
“Masking is a very important mitigation strategy to keep everyone safe.”
With the Delta Variant still spreading across the U.S., San Diego Unified School Board President Richard Barrera says he agrees with the state.
Richard Barrera, San Diego Unified School Board President
“We are not out of the woods yet in this pandemic, we know despite all of our best efforts to encourage vaccination, we will still have students on campus in the fall who will not be vaccinated.”
Barrera says the district expects 90% of their students to return back to campus when school begins in August.
6-thousand students in the district have been vaccinated. But Barrera says everyone will be required to wear a mask.
Richard Barrera, San Diego Unified School Board President
“Other students have been vaccinated and are not wearing masks. You’re putting students in a tough spot and can see situations of bullying or harassing.
Mireya Noriega has 2 daughters in San Diego Unified. She thinks masks are the safest option. She says…
She says parents who don’t agree with the masking still have their children taking online classes.
Barrera says online learning is an option for families who choose not to send their kids back to the classroom.
The state plans to go back to reassess the mask mandate on November 1st. Alexandra Rangel, KPBS News.

Restaurants who put up outdoor seating during the pandemic and intend to keep it….now have a few more weeks to get it up to fire code before facing fines. KPBS Melissa Mae checked in on one restaurant that’s welcoming the extra time.

People are enjoying the summer after the pandemic with bonus seating in parklets that many San Diego restaurants put up during restrictions.
Vince Busalacchi // Nonna General Manager
“This is San Diego: sitting outside, enjoying a glass of wine and enjoying great food.”
San Diego’s Little Italy neighborhood took full advantage of the concept and built some really nice outdoor dining spaces.
Vince Busalacchi // Nonna General Manager
“Having outdoor seating helps tremendously, it’s literally a billboard on the sidewalk. We have our food out and people walk by and say, ‘Oh that looks great and they want to come in.”
Vince Busalacchi (BOOSE-lah-kee) is the general manager at Nonna (NO-nah) in Little Italy and their parklet cost about 10 thousand dollars to build.
“Temporary outdoor business operation permits allowed restaurants to build parklets outside of their restaurants to accommodate for outdoor seating. The Mayor’s office just announced last night that they were extending their deadline to August 2nd for restaurants to restructure their parklets to be in compliance with State law and even safer for the public.”
Today, July 13th, was the original deadline for restaurants to bring their outdoor dining parklets up to code. Business owners who did not comply could have faced up to a 10 thousand dollar fine.
Vince Busalacchi // Nonna General Manager
“We’re lucky enough that we got this in the first place, so we kind of have to work with the city and the state to see if that means cutting roofs off and getting in compliance and that’s ok for a while, we’ll do what we have to do.”
With the new extension, restaurants have a little extra time to modify their parklets to fit within federal, state and local fire codes. This includes removing permanent rooftops and moving the portion of their parklets that block red curbs, among other requirements.
Vince Busalacchi // Nonna General Manager
“We’re on city property, so there’s that gray area where, who’s liable, who’s not liable, but all in all, we’re thankful that the city allowed us to use it in the first place.”
The restaurant industry is still trying to recover from the pandemic.
Vince Busalacchi // Nonna General Manager
“The restaurant industry, we kind of roll with the punches. We’ve been through a lot this last year, so this is just another bump in the road that we just of have to handle and figure out what, which way to go with it.”
The City of San Diego is working with business groups to help them bring their parklets up to code. The city says communication has already begun about the extension and the future of parklets in San Diego. Melissa Mae KPBS News.

Billions of dollars for broadband internet infrastructure across the state. That’s what’s in a new measure announced this week by the Governor’s office and State legislative leaders. And that’s important for millions of people in California who lack reliable access to the internet.

There are two big reasons why millions of Californians don’t have high quality internet – either they can’t afford it, or the infrastructure isn’t there to provide it. But a new agreement between Governor Newsom and legislative leaders aims to fix that. To people in urban and rural areas, the agreement, if it becomes law, will be a game changer.
“I’ve heard these conversations before, so what I’m looking for are investments.”
San Diego native Barry Pollard is the CEO of the Urban Collaborative Project… a group that identifies disparities within the greater San Diego area, and works on solutions. He says the new broadband bill is critical in closing the digital divide… helping families who are struggling.
Barry Pollard/CEO of The Urban Collaborative Project
“That have 4 and 5 kids that are in school and they have to take turns on the internet because they drop connection. That is real.”
The new legislation would set aside more than five-billion dollars for the expansion of broadband.
Three and a quarter billion to build out the lines… the so-called middle mile, and two-billion for the last-mile lines that will connect homes and businesses with local networks… one billion each for urban and rural communities.
CG: John Carroll/KPBS News
“There is another sizable group that is underserved when it comes to broadband – that is seniors. Here at the Mary and Gary West Senior Wellness Center, the group Serving Seniors is making sure they’re not forgotten.”
“There’s been a huge digital divide for older adults that’s just been exacerbated by the pandemic.”
Serving Seniors President & CEO Paul Downey says a lot of seniors had to just sit at home during the pandemic… they didn’t have the connectivity – the ability to stay in touch with family and friends. But there’s another aspect that’s especially important for seniors… their health.
CG: Paul Downey/Serving Seniors President & CEO
“It can also be cost effective if we can convert a lot of older adults to being able to use telehealth for things that don’t require an in-the-office visit with a physician.”
The infrastructure that will provide connectivity is just part of this effort… The Governor and legislative leaders say they’re also committed to providing funding before the end of the year – to help people pay for that access to today’s high-speed internet. JC, KPBS News.

Coming up…. Tiny homes used to house homeless veterans. We’ll have that story next, just after the break.

Among veterans, homelessness is a problem with many causes and… so far… few solutions. But in Kansas City, one organization is replacing the traditional shelter model with tiny homes. And it’s an idea that’s spreading across the country. Chris Haxel reports for the American Homefront Project.

ANCHOROUT: This story was produced by the American Homefront Project, a public media collaboration that reports on American military life and veterans. Funding comes from the Corporation for Public Broadcasting.

That’s it for the podcast today. Be sure to catch KPBS Midday Edition At Noon on KPBS radio, or check out the Midday podcast. You can also watch KPBS Evening Edition at 5 O’clock on KPBS Television, and as always you can find more San Diego news online at KPBS dot org. I’m Annica Colbert. Thanks for listening and have a great day.