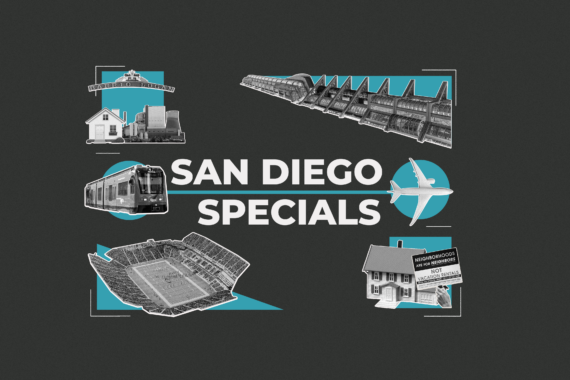 This week, Voice of San Diego is examining so-called San Diego Specials – a term coined by now-Mayor Todd Gloria to refer to long-running civic conundrums that have festered without resolution as a result of a lack of leadership and vision. Often, these are relatively small-scale challenges that other cities (or even other San Diego communities) have long since solved.

Apart from this series, we’re taking the week to reset and work on long-term projects. The Morning Report will resume its normal form next week.

It’s the San Diego Special that birthed the term “San Diego Special.” San Diego’s rail transit system does not go to the airport, and try as we might, we’ve never quite figured out how to make it so.

Mayor Todd Gloria, when he was a member of the state Assembly, coined the term San Diego Special in a Voice of San Diego op-ed a few years ago, when attempts to rebuild the airport’s Terminal 1 spilled over into rarely seen cross-jurisdictional fighting over whether the $2 billion project could be an opportunity to once and for all bring the trolley to the airport.

That feud has been settled, but the question it raised hasn’t. There’s maybe more buy-in than ever that connecting the transit system to the airport (with more than a local bus) is an important priority, and plenty of folks are spending quite a bit of political capital on the idea. But it’s still not really clear how – or if – the nagging question will be resolved.

Andy Keatts lays out the decades-long toiling that led to our transit-to-the-airportless status quo, plus the options on the table today.

The San Diego Association of Governments, led by its outspoken director, Hasan Ikhrata, has taken the helm of the effort. You might have heard about its preferred solution – the San Diego Grand Central concept, which would redevelop the NAVWAR facility in Old Town into a dense urban environment on top of and around a new central mobility hub for regional transportation. All of the region’s transit operations would have a home there, and there’d be a people mover train from the hub to the airport terminals.

But it’s exploring some alternatives, too, as state law requires. One is a big closer to the airport, making the people mover trip a bit faster, but would involve building a more modest core of the region’s transit system a bit south, near the new car rental center and the Washington Street Trolley Station.

Or it could settle on a simple trolley spur from south of the airport, at or near the existing Santa Fe Depot, that runs up Harbor Drive to connect with the terminals.

That’s a lot up in the air. The good news? The airport’s terminal redevelopment is as good as done, with final votes expected soon, and a groundbreaking possible before the end of the year. That project has secured some $500 million for an eventual transit decision, and the airport is reserving space between Terminal 1 and Terminal 2 for a new transit station.