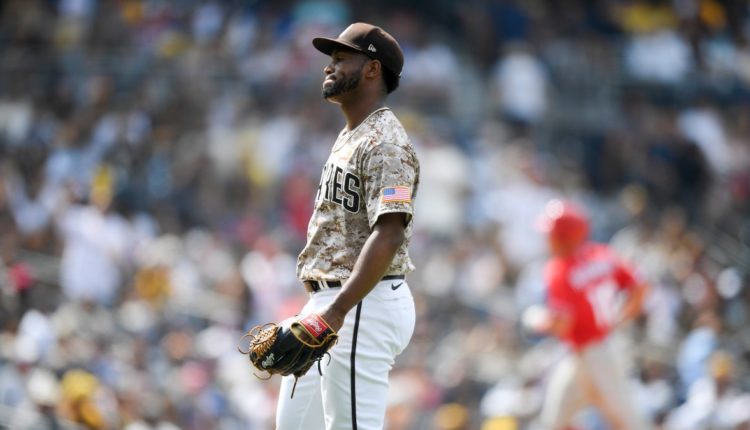 Leading up to the July 30 trade deadline there were rumors circling that the Padres had looked into acquiring Kyle Gibson from Texas. Philadelphia got him instead (in fact, the Padres landed zero starting pitchers).

On Sunday it looked like that was a very large mistake by the Friars.

Gibson tossed a gem while the Padres struggled through a bullpen day in a 7-4 loss that gave the Phillies the series and, more importantly, knocked San Diego out of the 2nd National League Wild Card spot. The Reds beat the Marlins and now have a one game lead on the Padres, who are going to need some help to reach the post-season.

Gibson threw 8.0 innings of 1-run ball. He only struck out three but was about as efficient as you’ll see in today’s game. At one point he got seven outs on just 17 pitches and retired the last 14 Padres he faced. The only run Gibson allowed came in the 1st inning.

Trent Grisham and Fernando Tatis Jr. both doubled to start the game. Grisham scored on a sacrifice fly by Manny Machado … and the Friars didn’t really even threaten again until the 9th inning.

Craig Stammen started for the Friars and was solid, going 2.0 shutout innings. Ryan Weathers replaced him and didn’t have trouble with the 3rd inning. After that the game flew off the rails.

Weathers allowed a home run to Rhys Hoskins on a 3-0 pitch that tied it 1-1. A string of singles later Odubel Herrera singled to bring in two more and make it 3-1 Phillies.

Miguel Diaz replaced Weathers and was not sharp, either. Diaz gave up another solo shot to Hoskins to make it 4-1 in the 5th inning and in the 6th inning was touched up for two more bombs, a solo shot by Herrera and a 2-run opposite field blast from J.T. Realmuto that make it 7-1.

The Padres got three in the 9th on a bases loaded double by pinch-hitter Austin Nola to cap the scoring.

The Padres get Monday off then start a 3-game set against the Dodgers at Petco Park that could make or break their season.