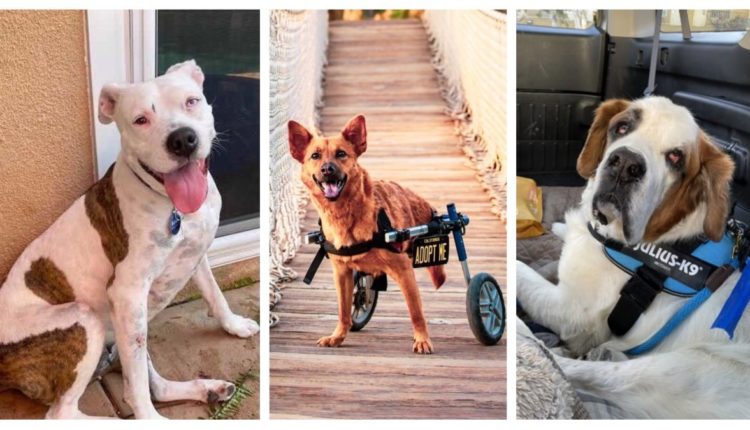 Walk around the bustling streets of Tijuana or Ensenada and you’ll come across entertaining nightlife, lively restaurants, countless shopping opportunities and other attractions tourists dream of. But in addition to these popular cities’ hot spots, chances are high that you’ll see plenty of street dogs fighting to survive.

Knowing the deplorable conditions and illnesses these dogs are subjected to every day, San Diego-based non-profit The Animal Pad (TAP) is giving street dogs from Mexico a second chance at life by rescuing them and placing them into loving homes in America’s Finest City.

“We chose Mexico because we feel like because not only are we in a great geographical location, but we have the resources that a lot of rescues in Mexico don’t’ have,” Christy Lambert, Director of The Animal Pad’s TAPACT team, told NBC 7. “We’re passionate about helping dogs many people wont or aren’t able to help.

These dogs will roam around the streets day and night in search of where to rest, scrummage through garbage cans looking for barely enough food to survive the day and prowl outside restaurants in hopes someone will take pity on them and help even just a bit. Often riddled with health issues and disregarded by many, these pups will die on the streets they fought hard to survive in if they are not rescued.

Before and after images of Amara. Right: Amara was found severely malnourished roaming around the streets of Mexico. Left: After veterinary treatments and care from The Animal Pad, Amara’s health recovered greatly.

“The dogs are often seen as pests, so they’re kicked away if they try to enter a building or rocks are thrown at them to get them away from people or businesses,” Lambert said. “Seeing the dogs as pests comes with a slew of abuse.”

In an effort to rescue as many dogs as possible from their poor conditions, Stephanie Nisan founded TAP just over a decade ago. Her organization is a 100% foster-based rescue that is dedicated to placing dogs into the best households for them.

TAP works with partner rescues in Mexico to get dogs in shelters from across the border and bring them to the U.S. Once retrieved, the rescue dogs are given flea and tick medicine, a bath, a medical check by a veterinarian and then they go through a quarantine process. After they have been cleared for adoption, the dogs are placed in foster care until they are matched with a potential new family.

Dogs can react poorly to their diet or a bad attitude to an owner – so sometimes pet owners turn to “animal communicators” like Lydia Hiby to figure out what’s going on.

How to Adopt From TAP

Anyone interested in adopting a dog from TAP’s adorable roster can fill out applications online. Lambert said the process is fairly quick, with an average time of two weeks from application to adoption.

Once prospective pet parents fill out applications for the dog(s) they are interested in, their form will be reviewed by the rescue’s adoption team. The team will contact references applicants put, conduct a home check to ensure the dogs will be safe and once everything is cleared, the applicant can get in touch with the dog’s foster to schedule a meeting.

“There’s a perfect dog for you somewhere in a rescue or shelter,” Lambert said. “We have nearly 150 dogs in foster so it’s likely that your perfect dog is there.”

Lambert noted that apartment residents are welcomed to submit applications for a pet and are often approve for adoption so long as the organization believes the dogs will do well in apartment settings.

To take a look at the adoptable dogs in TAP’s care, click here.

A street beats the heat by laying in a puddle of mud.

How to Foster TAP Dogs

Applying to foster dogs is similar to that of the adoption process. Anyone interested in being foster parents to canines in need can click here for more information.

“(For fosters), you don’t have to be responsible for buying anything,” according to Lambert, who said expenses for the dogs are covered by them. “You have to pick up supplies from our headquarters in La Mesa, need to give them love and care, take them to vet appointments and we appreciate the occasional appearance at adoption events.”

Lambert noted that foster pet parents must be located in San Diego so that they can be in close vicinity to the dogs’ veterinarians.

In addition to fostering and adopting, TAP also aims to tackle the core issue of what gets dogs on the streets in the first place. Just under three years ago, the non-profit created a new team called TAPACT to fight against overpopulation.

“Rescues can only do so much when people are still not spaying or neutering, so TAPACT was founded to try to combat those issues like unethical and illegal breeders,” Lambert said.

An image of adoptable pup, Forrest.

“Rescuing dogs is a band-aid for the symptom, but we also want to sponsor spay and neuter clinics, spread information on overpopulation and we really just want to help people understand that they can have an active part in saving dogs,” Lambert said.

TAP’s outreach has proven successful and the organization has had much to celebrate; 2020 was a record-breaking year for adoptions with the non-profit placing approximately 1,700 dogs in loving homes from March 2020 to date.

The figure was a huge victory for TAP and most importantly, for the dogs that found their fur-ever families.

“They just want to be loved,” Lambert said. “When you adopt a dog, you are saving a life. Truly. Otherwise, these dogs would continue to be neglected on the streets, dying without pet care.”

Animal communicator and author Lydia Hiby gives potential dog adopters tips on what to consider before entering the shelter.