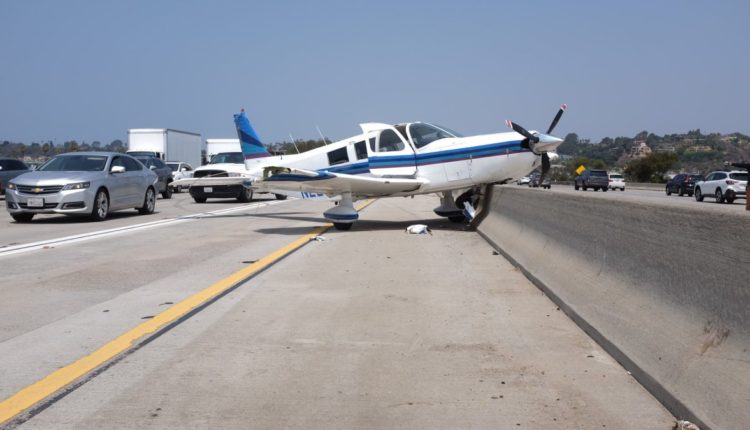 A small airplane made an emergency landing Tuesday on southbound Interstate 5 near Del Mar in San Diego’s North County, causing traffic for motorists confused and stunned by the unexpected sight.

California Highway Patrol said the small aircraft made its landing sometime around 12 p.m., prompting several emergency vehicles to rush to the scene. It is unclear why the pilot landed on the freeway.

NBC 7’s Consumer Bob was at the scene a few minutes later. Here’s what he saw.

SkyRanger 7 captures images of a small plane that landed on I-5 near Del Mar on Aug. 24, 2021. The aircraft was missing part of its right wing. See it here.

Photographs of the scene showed the aircraft off to the far left of the southbound lanes, resting near the freeway’s divider. Consumer Bob, at the scene, reported seeing fuel leaking onto the northbound side of I-5. Crews then began cleaning up the fuel.

Consumer Bob said one man who appeared to be the pilot of the plane was seen with injuries to his leg. It is unclear how many occupants were aboard the aircraft.

The small aircraft appeared to be missing half of its right wing.

Aerial image shows first responders at the scene of the plane landing.

NBC 7’s SkyRanger captured aerial images at the scene, which showed the plane missing half of its right wing. The wing appeared to be about 500 feet away from the aircraft, sitting on the side of the freeway.

A piece of the aircraft also appeared to have landed on a car that had pulled over to the shoulder . It is unclear if the occupants of that vehicle were injured in connection to the landing.

It appears a piece of the aircraft landed on a car on the freeway,

Puzzled drivers could be seen getting out of their cars, snapping pictures of the plane and its broken wing on the freeway.

The incident caused a back-up on the freeway with traffic at a complete stop just past Via De La Valle.

At around 1:30 p.m., the San Diego Fire-Rescue Department tweeted that all lanes along southbound I-5 at Via de la Valle would be closed so officials could investigate the incident and work to clear the plane off the freeway.

Injuries were not immediately reported in connection to the incident.

This is a breaking news report. Please refresh for more updates.