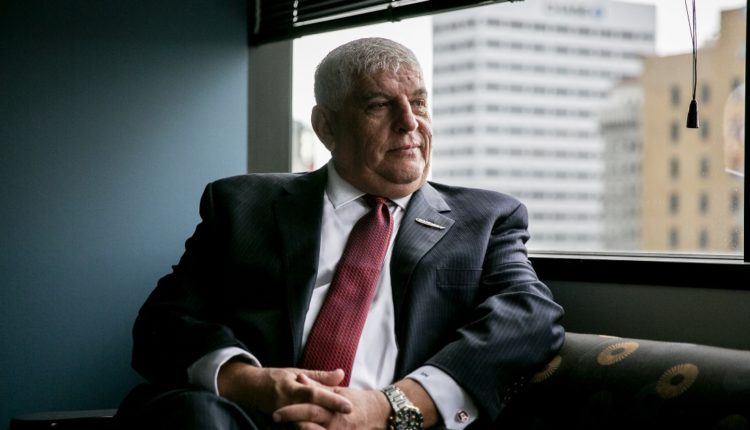 Hasan Ikhrata, the sometimes polarizing executive director of the San Diego Associations of Governments, was given a three-year contract extension on Friday.

Twelve of the 19 members who serve on the Board of Directors of the regional planning agency gave Ikhrata a vote of confidence on Friday. He will continue to earn an annual salary of $414,149, declining an annual bonus of as much as 7 percent.

“I told them I appreciate being here and that it has been a difficult year for many of our residents,” said Ikhrata, who lives in downtown San Diego. “I approached them before they asked me about a bonus. I am well compensated and I feel that given the circumstances, I feel strongly that there is no need for the bonuses that are normally offered to leadership.”

It was the second formal evaluation of Ikhrata since he was hired in 2018 to manage the agency and administer its nearly $1.14 billion budget. SANDAG oversees the long-range planning for county infrastructure and other needs.

The majority of the board considered Ikhrata’s performance “exceeding expectations” and approved his fiscal year 2022 performance objectives, which include strengthening collaborative relationships around the county, advancing regional priorities, delivering capital projects, enhancing SANDAG’s organizational culture and digital capabilities, and looking for funding sources.

Missing from the objectives, some leaders said, was anything about TransNet, the half-cent sales tax for local transportation projects first approved by voters in 1988, and extended in 2004 for another 40 years. Ikhrata initially proposed diverting the money dedicated for road projects to transit, but faced intense pushback from East and North County officials.

National City Mayor Alejandra Sotelo-Solis praised Ikhrata for his efforts to help the entire county and, “when possible,” finish projects under budget. Sotelo-Solis also said she appreciated Ikhrata’s vision for equity and diversity as part of SANDAG’s core values.

“It’s not something there just to appease people,” she said. “It acknowledges those who feel dismissed or not valued and speaks volumes to our goals to continue to move forward.”

Oceanside City Councilman Christopher Rodriguez registered the only no vote, but offered no explanation. Carlsbad Mayor Matt Hall and San Marcos Mayor Rebecca Jones, both of whom took issue with Ikhrata’s performance, did not vote on the matter.

Hall said he was unhappy that Ikhrata had donated money toward political campaigns, which he called unprofessional and hurtful to the credibility of the board. He also said that the TransNet sales tax promises made to the community have not been honored and other undelivered commitments have divided the board.

Jones said residents in her area feel disenfranchised, like North County is “never really thought of.” Citing the broken TransNet promises and a proposal for a vehicle miles traveled tax, Jones said many people work far from home and will need their cars and better roads to get around. She called for greater transparency in financial obligations to taxpayers.

Reiterating what he wrote in a letter to the board, Ikhrata said the last 12 months proved challenging because of the global pandemic and associated economic crisis, but that he was proud that the group has made “significant progress” serving the communities in the region.

He highlighted his “Five Big Moves” vision that debuted in 2019, an ambitious, transit-focused plan intended to help the region meet state-mandated climate goals.

The moves vision received mixed reaction when it first debuted. Many leaders of cities across the county say that the majority of the region’s voters supported the TransNet tax and the road projects that were outlined in the ordinance. That plan was not listed in Ikhrata’s performance objectives for 2022.

He said that when he was hired three years ago, there was a mission to create a world-class organization that had a big-picture perspective and a forward-thinking attitude. Ikhrata said he wanted to continue to work toward making SANDAG more credible and accountable, so that the public knows that “We say what we mean and we mean what we say.”

Ikhrata pointed to more than 600 projects that SANDAG has brought to the region, including $100 million to fund emergency repairs and stabilization of the seaside bluffs at Del Mar, bond refinancing that is estimated to save taxpayers more than $22 million, signing an MOU with Mexico toward completing a new Otay Mesa port of entry and moving on construction of a $2 billion mid-coast Trolley project.

Ikhrata told the board that SANDAG is positioned “for even greater levels of achievement in 2022 and beyond.”

Imperial Beach Mayor Serge Dedina said he is a “big fan” of Ikhrata, who “ignores all the drama and focus(es) on leadership and getting things done to improve the quality of life.”

Dedina thanked SANDAG for coming to the city’s aid when millions of gallons of sewage flowed from the Tijuana River into Imperial Beach earlier this year. He said the state and federal government said there was nothing either could do, but SANDAG stepped up to help.

Similarly, Dedina praised SANDAG for how it handled the bluffs collapse in Del Mar. SANDAG “went into action and you guys got stuff done… there was no drama, no six months of meetings.”

“That’s what government is supposed to to — make policy and get things done,” Dedina said.

Ikhrata managed the Southern California Association of Governments for more than a decade starting in 1994, and previously worked for the Los Angeles County Metropolitan Transportation Authority and the South Coast Air Quality Management District.