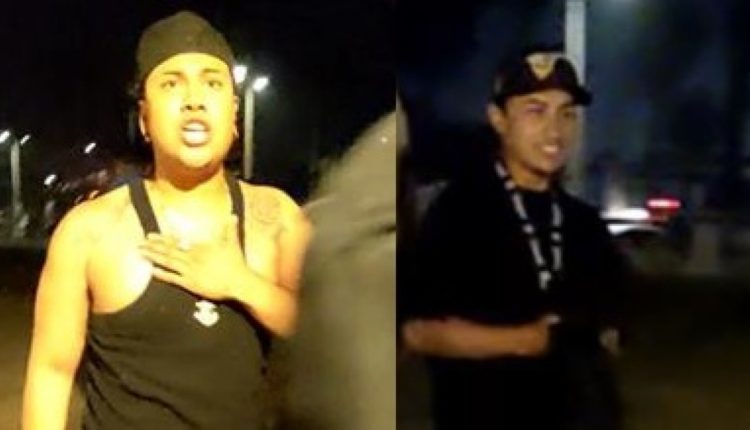 San Diego police are seeking to identify at least two men who allegedly attacked, harassed and pointed a gun at a group of LGBTQIA+ people late Monday night in Mission Beach.

The victims said the men shouted homophobic slurs at the group throughout the confrontation, which police described in a news release as an “assault with a deadly weapon and hate crime.”

The incident happened around 11:35 p.m. Monday as about 25 friends, most of them LGBTQIA+, were having a bonfire at Mission Beach south of Belmont Park, according to police and people who were at the bonfire.

One of the attendees wrote in a social media post that one man approached the group and asked to sit with them. When members of the group told him they were having a private celebration, the man left. Shortly afterward, someone threw a full can of beer toward the people at the bonfire.

A person from the group, who asked not to be identified, said the assailants threw several more bottles and cans of beer at her and her friends. When asked to leave the group alone, the men pulled out cellphones and started to record.

“Throughout this, they were yelling homophobic slurs at us and threatening to rape us,” the victim said. Then, she said, one of the men threw a 24-ounce Modelo tall boy can at her from “less than 10 (feet) away,” striking her left eye and causing her to drop to the ground.

Photos shared on social media and with the Union-Tribune on Tuesday showed her eye bloodied, bruised and badly swollen.

One of the assailants pulled out a black, Glock-style handgun and pointed it at the head of a man from the bonfire group, San Diego police Capt. Scott Wahl said in a news release.

The woman hit by the beer can said the men left in cars, continuing to hurl homophobic insults as they left.

“This was a clearly targeted attack,” the victim said. “It wasn’t a coincidence.”

Police released photos and videos of the attackers captured by the victims. Police described the man who threw the beer can at the woman’s face as Hispanic and roughly 25 to 30 years old. He wore a backwards black baseball hat, black tank top, ripped black jeans and black shoes. He also wore a chain necklace with an anchor pendant and had rose or leaf tattoos across his chest.

The man who allegedly pointed the gun was described as thin, Hispanic and between about 18 and 25 years old, police said. He wore an oversized black T-shirt, black and green camouflage shorts, white socks and black shoes. He also wore a black and white lanyard and a black or brown baseball hat, possibly featuring the San Diego Padres’ Swinging Friar logo.

San Diego County Crime Stoppers is offering a $1,000 reward for information leading to an arrest in the case. Anyone with information about the attackers’ identities was asked to call the San Diego Police Department’s Northern Division at (858) 552-1726 or Crime Stoppers’ anonymous tip line at (888) 580-8477.