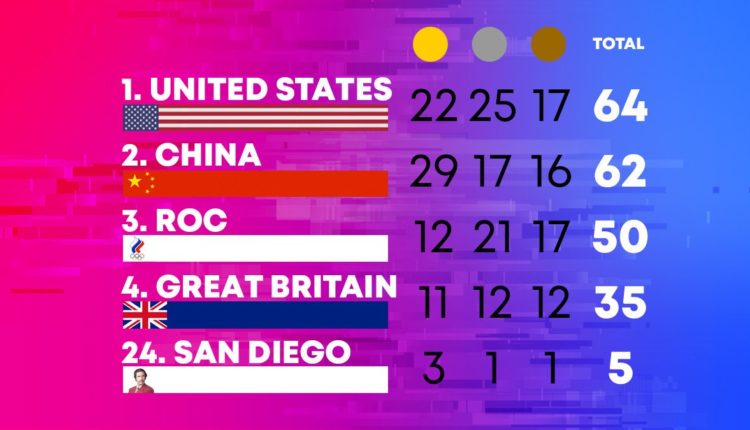 Editors note: San Diego County is not actually a country competing in the Tokyo Olympics.

With five overall medals, the county of San Diego in Southern California is currently in 24th place in the medal count at the Tokyo Olympics but still trails Ukraine, Georgia and Hungary, each of which boasts six of the precious medals.

San Diego has plenty of time and competitors to put points on the board — in fact, on Monday night and Tuesday, track & field star Brittney Reese, who trains in Chula Vista, could make waves; as could Vista native Brooke Anderson, who’ll be throwing the hammer at 3 a.m. on Tuesday; sprinter Michael Norman, a San Diego native, will run in the 400m event; and Will Claye of Chula Vista, will post up for the triple jump qualifiers.

All the athletes with San Diego connections who have traveled to Tokyo are covered with Olympic glory, of course, but the accomplishments of the five who have stood atop the podium are special. Here’s more about each of them.

The Scripps Ranch native and San Diego State University alum held a lead he secured in the second round of the Tokyo Olympics golf tournament to secure his gold medal 18-under par.

NBC 7’s Steven Luke caught up with Xander Schauffele after his win.

The 27-year-old entered the final round of the men’s golf tournament with a one-stroke lead on Japan’s Hideki Matsuyama. And while a few golfers made it close, it was Schauffele who walked away with the lead.

It was firsts all around when street skateboarder Jagger Eaton secured bronze in the sport’s debut at the Tokyo Olympics.

And if winning a medal at all wasn’t remarkable enough, Eaton did it with a busted ankle.

“I really torqued my ankle three months ago,” the 20-year-old Eaton told NBC 7. “I almost gave myself a spiral fracture.”

That’s what happens when a bone experiences extreme force, cracking diagonally and resembling a corkscrew. Eaton skated on it at the world championships in Rome in the first week of June to make sure he could qualify for the Olympic Games, and things got even worse.

Watch highlights from Eaton’s medal-winning performance as he talks with TODAY:

His wife and ranch team in San Diego couldn’t be prouder of Peters and Mopsie, the horse Peters rode to victory.

It wasn’t the German-born rider’s only accomplishment of the Tokyo Olympics: At 56-years-old, Peters also made history as the oldest U.S. Olympic medalist since 1952.

Watch Peters, Sabine Schut-Kery and Adrienne Lyle trot their way to silver below:

The San Diego native Kelsey Plum led the women’s 3×3 basketball team to the top of the podium at the Tokyo Olympics after beating Russia in the finals.

Before the Tokyo Olympics, Plum’s coaches and neighbors watched her journey to this moment.

“We knew something was different about Kelsey,” San Diego Sol Basketball Coach Spatticus Harris said. “I used to play pick-up basketball with her father back in the day, and she joined our program San Diego Sol. I got to coach her in the seventh and eighth grade, and talk about someone that always loves a challenge and ultra-competitive.”

Plum’s journey on the basketball court has taken her from San Diego Sol to La Jolla Country Day to the University of Washington to the Las Vegas Aces to the Tokyo Olympics.

Watch Plum and Co. drive to the gold here:

Swimmer Michael Andrew – an Encinitas resident who surfs North County breaks – will head home with a gold medal after the closing ceremonies.

It’s been a while since San Diego has had a swimmer in the Olympics with gold medal potential, but Andrew fit that bill, qualifying for three separate individual events, but it was his teamwork that paid off over the weekend.

The U.S. men’s swim team had won every Olympics gold medal in the 4x100m medley relay in event history – and it kept that streak alive Saturday night.

Ryan Murphy, Caeleb Dressel, Zach Apple and Andrew beat Great Britain and Italy’s teams, taking home the gold medal with a world-record time of 3:26.78 on their final day of swimming at the Tokyo Games.

After disappointing finishes in previous swimming events and controversy over decisions he’s made regarding the pandemic (including not getting vaccinated and not wearing a mask during an interview in the media area, where masks are optional but many athletes have worn them), Andrews victory had to have been sweet.

Here’s Andrews and the medley makers bringing home the gold: