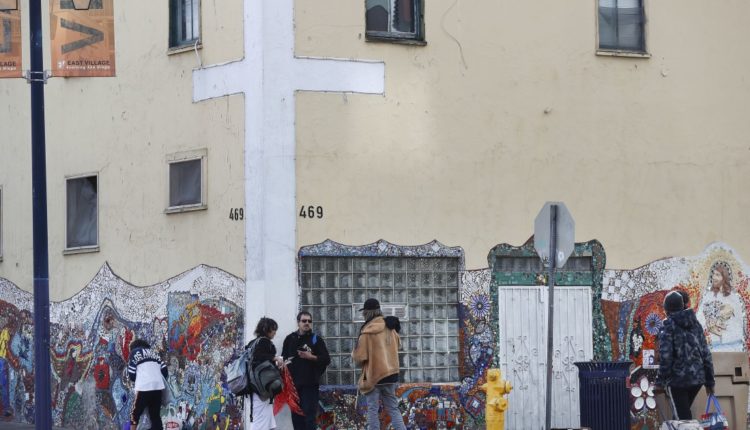 Unable to correct the many costly code violations at its downtown San Diego building, the homeless ministry God’s Extended Hand has agreed to turn over the property to Father Joe’s Villages, which plans to build affordable housing on the site.

“It’s a sad time,” said the Rev. Simeon Corona, God’s Extended Hand’s board president. “This has been a real blessing and a place of connection for so many for so long. But also it’s going to be have a bright future.”

Deacon Jim Vargas, president and CEO of Father Joe’s Villages, said the plans are not a done deal and there are many steps ahead, but things are moving forward.

God’s Extended Hand has served San Diego’s homeless population for 97 years and purchased the 1889 two-story building on 16th Street and Island Avenue in 1983. The property includes three cottages and some residential units upstairs.

All buildings will be razed under the plan, and Vargas said he expects construction of its replacement will take at least three years.

City enforcement officers began documenting health and safety code violations at the building in 2014. After the violations were not corrected, the city attorney’s Nuisance Abatement Unit served God’s Extended Hand a notice of violation on Jan. 31, 2019. That same month, the city gave the ministry 45 days to submit plans to bring the violations into compliance.

Citations included work that was done without permits, including plumbing, electrical, the reconstruction of two staircases, the conversion of a storage room into a commercial kitchen, alternations and additions to the second floor, installation of an outdoor laundry facility and conversion of a dwelling unit into a storage room.

It was all too much for the ministry’s budget to handle, Corona said.

“This is a logical, practical thing to do, and it serves the underlining issue of housing,” he said.

The ministry itself is not dissolving, Corona said, and it is expected to have a presence on the ground floor of the new building. Until then, he said God’s Extended Hand will continue to work with churches that have been providing meals, which in the future likely will be served at the nearby Neil Good Day Center, a drop-in facility for homeless people operated by Father Joe’s Villages.

The last meal at 16th Street and Island Avenue will be served Friday.

Vargas said the plan is in the early stages, and he does not know how many units or stories will be in the new building.

The project will be the latest to work toward Father Joe’s Villages’ goal of creating 2,000 affordable housing units under its Turning the Key initiative. So far it has created 83 units in South Bay’s Benson Place and 42 units at the Bishop Maher Center.

The 407-unit, 14-story Saint Teresa of Calcutta Villa is under construction in the East Village and is expected to open in February. Vargas said he is looking at several motels that could be purchased and converted into housing as part of the initiative.

Besides serving meals and delivering sermons, God’s Extended Hand has been home to about a dozen tenants who live in the cottages or upstairs. Corona said some already have moved out, and he is hoping to find shelter or permanent homes for others by Monday.

While the building itself in is poor shape, the artwork outside God’s Extended Hand is an eye-catcher. A colorful mosaic depicting Jesus and other religious images wraps around the building and stands more than 10 feet high in some places. The mosaic was created 10 years ago by art teacher Jeremy Wright and San Dieguito Academy students,

Neither Vargas nor Corona know if there’s a way to save the artwork. Corona asked anyone with suggestions or other offers to help during the transition contact him at (619)760-6373 or frsimeonbcorona@gmail.com.

San Diego Couple Gets COVID-19; One Vaccinated, One Not – NBC San Diego