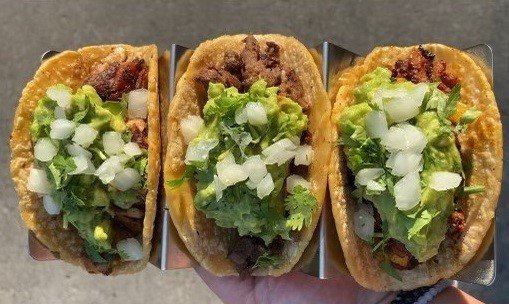 San Diego’s Seaport Village has added another restaurant to its revitalization roster: a fast-casual eatery that’ll specialize in Mexican food, including a local specialty known as “Cardiff Crack.”

The Port said this week that a lease had been approved for yet another new restaurant at the landmark – which is currently undergoing an overhaul, adding lots of new businesses –  called “Crack Taco Shop.” It’s the second location for the brand; their first is on Camino Del Rio N. in Mission Valley.

According to the Port, construction on the taco restaurant at Seaport Village will start in the spring of 2022, and the goal is to open the eatery by the summer of 2022. Crack Taco Shop will be in the Seaport Village Lighthouse District, near Spill the Beans on West Harbor Drive. The eatery will feature outdoor dining along the promenade there.

Cardiff Crack is burgundy pepper tri-tip steak, which the brand says it’s been using in its tacos and burritos since 1985.

Steve Abbo, of the Crack Taco Shop, said customers will be able to experience the eatery’s full menu at its new Seaport Village location – including breakfast, the “Crack Tri-Tip Taco,” and other items featuring the tri-tip, like nachos and sandwiches.

Specialty Micheladas, beer, wine and sangria will round-out the menu.

The taco restaurant will be the 18th new tenant to join Seaport Village since the Port of San Diego began revitalizing the waterfront landmark.

A few months ago, the Port announced that Zytoun Gourmet Mediterranean and Old Harbor Distilling Company were the newest locally-owned businesses to join the lineup at the shopping, dining and entertainment center along San Diego’s Embarcadero. Those two spots are also due to open in the spring/summer of 2022.

Of course, this being San Diego and all, Crack Taco Shop isn’t the only new taco spot at the landmark.

Earlier this year, Mike Hess Brewing paired with a Mexican restaurant called Quiero Tacos to bring craft beer and tacos – two things near and dear to San Diegans’ hearts – to Seaport Village. More about that here.

The Port of San Diego assumed ownership and operation of Seaport Village in 2018. In a press release, the Port said the Port Board had approved investment spending of approximately $7.8 million to date to transform Seaport Village “into a vibrant waterfront shopping, dining and entertainment center.”

Approximately $2.5 million has been spent on “enhancing and elevating” the landmark already, including fresh exterior paint on buildings, new signs, landscaping and adding amenities like seating to the bayfront Urban Beach area. The Port said another $1.2 million has been invested into helping new tenants renovate their spaces before opening.

The Port is committing another $4.1 million improvements for tenants, including restaurant concepts that have not yet opened.

What’s Happening at Seaport Village: Where Can I Eat and Shop?

The Port of San Diego said that with Zytoun and Old Harbor joining the lineup, 63 of the 71 spaces at Seaport Village are now filled. Here’s a list of the new tenants, some of which are currently open and some that debuting soon:

Seaport Village’s other vendors can be found here, and include longtime staples like Edgewater Grill and gift shops like Hot Licks, Crazy Shirts and San Diego Surf Co.

For the latest updates on what’s happening at Seaport Village, visit the landmark’s website here.

Seaport Village is located along the waterfront at 849 West Harbor Dr., adjacent to downtown San Diego and the USS Midway Museum and south of the San Diego International Airport. The shopping and dining complex debuted in 1980; it is owned by the Port of San Diego and operated in partnership with Protea Property Management.

An arena, aquarium, seafood market, and event venue are just some of the possibilities for the waterfront property. NBC 7’s Bridget Naso heard some citizen reaction to the proposals.

Seaport Village has been undergoing enhancements as part of the Port’s ongoing Central Embarcadero project, which includes 70 acres of land and water between downtown San Diego and the San Diego Bayfront.

The Board of Port Commissioners directed staff in October 2015 to move forward on the development strategy for this scenic San Diego zone, and you can check out the progress of the project here.

Seaport Village may see a $1 billion redevelopment plan in its future. NBC 7’s Monica Dean has more on what this could mean.