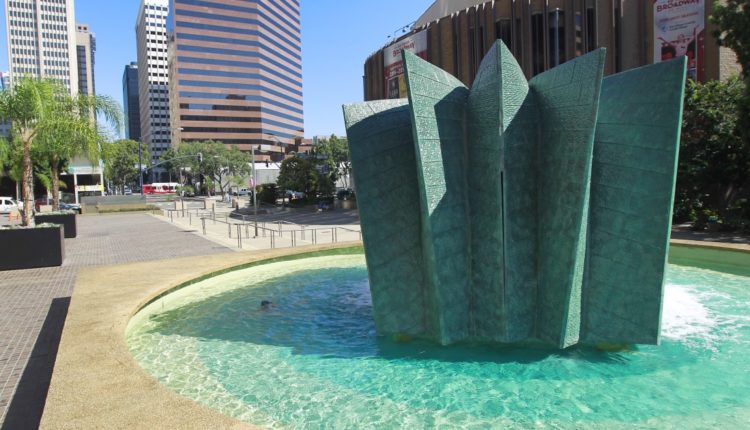 The city of San Diego has reversed course and agreed to resume monthly rental payments on Civic Center Plaza, one of two lease-purchase deals its lawyers had been trying to cancel due to an alleged illegal conflict of interest.

The city’s concession avoids what could have been a problematic eviction for hundreds of city employees who work in the Civic Center Plaza, including the City Attorney’s Office staff.

City Attorney Mara Elliott reached an agreement with the landlord of the office tower just north of City Hall last week, as an eviction proceeding against the city was about to unfold in San Diego Superior Court. The city made the July and August payments of $313,000 each last Monday, the same day they were due for a court hearing.

“The City recognizes it cannot continue to occupy the CCP building free of cost in perpetuity,” Elliott spokeswoman Hilary Nemchik said by email. “While the city cannot make payments on an illegal lease, it can reach a separate agreement.”

The deal to restart the monthly lease payments does not impact the city’s ongoing lawsuit, the City Attorney’s Office said.

“We are pleased to have come to this agreement to ensure city services continue from the CCP property uninterrupted while our litigation to recoup tax dollars for San Diegans continues,” Nemchik wrote.

The city’s lawsuit involves the lease deals of Civic Center Plaza and a high rise at 101 Ash Street, formerly the Sempra Energy headquarters. Wilmington Trust financed both transactions on behalf of the seller, Cisterra Development.

Elliott announced In June that she was going to court to void the lease-to-own agreements for the Civic Center Plaza and 101 Ash St. because a real estate broker who consulted on behalf of the city, Jason Hughes, did not disclose payments from one the other parties in the deals.

For years Hughes had said he was volunteering his expertise to former mayors Bob Filner and Kevin Faulconer, but he in fact was paid almost $10 million by Cisterra, the seller in both transactions.

The San Diego Union-Tribune reported in June that Hughes was paid $5 million in 2015 for his work on the Civic Center Plaza deal and $4.4 million for his help on the Ash Street contract in 2016.

The City Attorney’s Office announced its lawsuit the next day, saying the two lease contracts were illegal because Hughes failed to disclose those payments. Elliot called it “a massive betrayal of the public trust and a clear violation of California’s anti-corruption laws.”

The city’s lawsuit seeks the return of $44 million in allegedly illegally paid rent. More than $24 million was paid to lease the 101 Ash St. building, which cannot be occupied due to asbestos and other issues.

Hughes, through his attorneys, has denied any wrongdoing and has said he told Faulconer and other senior city officials that he expected to be paid for his work on the leases.

Faulconer, who was termed out of office in December and now is a candidate in the Sept. 14 recall election of Gov. Gavin Newsom, said he did not know Hughes was paid for his work on the two leases.

Two senior members of the his administration also said Hughes’ arrangement with Cisterra was not disclosed, although a 2014 letter from Hughes discussing the compensation was received by another top aide.

Elliott’s lawsuit in June seeks to void both lease-to-own agreements under the state’s anti-corruption law and names Hughes as a defendant.

“The city’s position is that the CCP lease was infected by the illegal actions of Jason Hughes and Cisterra and so is void by law,” the City Attorney’s Office said.

Wilmington Trust filed its eviction case against the city last month, accusing the city of wrongly withholding lease payments on a building the city has occupied for more than 25 years. It did not immediately respond to a request for comment.

Cisterra spokesman Eric Rose said San Diego city officials have made the right decision and the lender is pleased to begin collecting monthly payments on the Civic Center Plaza again, although the city had no right to withhold them in the first place.

“Cisterra reached no separate agreement and is pleased the city reversed course on its flawed legal strategy and started paying rent to avoid being evicted,” Rose said.

The city also has sued Cisterra and others involved in the Ash Street lease, but not in an effort to recover the tens of millions of dollars it spent to lease the vacant building.

Instead, the October 2020 litigation asks a judge to validate Faulconer’s decision a year ago to start withholding the $535,000 monthly lease payments until the Ash Street building is usable.

Even before the city sued Cisterra, the city was named as a defendant in a related lawsuit filed over the Ash Street deal filed by San Diego resident John Gordon.

The Gordon complaint alleges the Ash Street lease deal was illegal because it improperly indebted the city without voter approval. That case survived a motion for dismissal earlier this year and depositions are now under way.