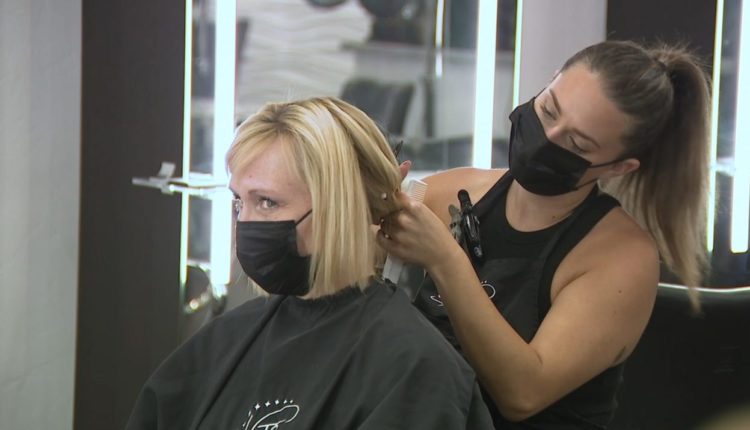 ENCINITAS, Calif. – Businesses across San Diego County are grappling with how to handle the latest local recommendation of masks indoors for both vaccinated and unvaccinated people.

Starting Wednesday, Headlines The Salon is requiring masks for everyone who walks through the door.

“We haven’t had any resistance,” said Gayle Fulbright, owner of the Encinitas-based salon.

On Tuesday, the county announced it plans to follow the latest guidance from the U.S. Centers for Disease Control and Prevention, which recommends mask-wearing indoors for all, regardless of vaccination status, in areas experiencing “high” or “substantial” COVID-19 transmission.

San Diego County is among those counties in the U.S. currently listed by the CDC as having “high” transmission rates.

Mask-wearing has remained a requirement indoors across California for unvaccinated people. Enforcement of the requirement is largely based on an honor system, making it uncertain if unvaccinated residents were abiding by the rule.

In light of the new county recommendation, Fulbright said her staff have warmed to the idea.

“First reaction, it’s like ‘ugh’ and then when we explain that we’re doing it for not only the safety of them, but we’re doing it for the respect of their guests, they’re like ‘no you’re right,’” she said, “and last thing they want to do is be shut down, closed down and go through all that again.”

She added that other salon owners are feeling the same way: “We’re in such close contact with our people that it just makes sense.”

“That’s the kind of level were talking about,” Schooley said. “It’s a really important contribution when viral transmission rates in the community are high, which they are in San Diego right now.”

But as the county’s only recommending masks indoors rather than mandating it as some municipalities and private businesses are doing. That leaves it up to individual business owners to determine if they want to require masks indoors.

“I think at GOODONYA, we’re just going to do what the mandate is, that’s what we’ve done all along with COVID: follow the mandates,” said Kris Buchanan, founder of GOODONYA, a restaurant in Encinitas. “We kind of believe in peoples individual decisions to take care of their bodies in all respects, so we’re not going to be policing our customers.”

She said they’re sticking with the honor system when it comes to vaccination status. She also said masks in restaurants, in her experience, have not worked that well.

“To be quite honest, it was a joke anyway,” Buchanan said. “They wore their mask for 15 seconds before they sat down and took them off.”