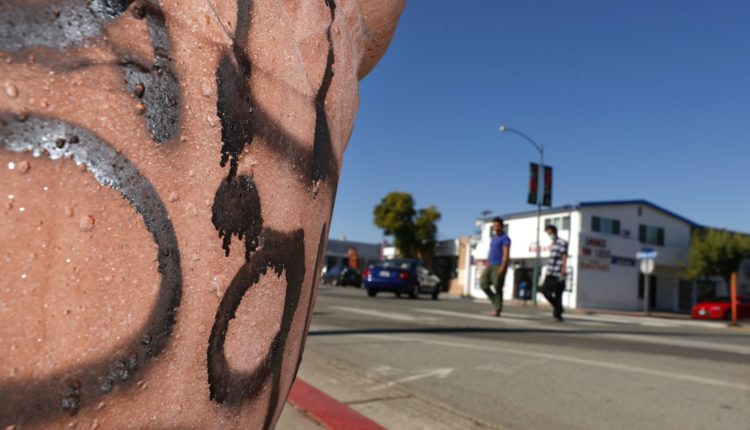 San Diego is boosting funding for a city program that removes graffiti from residential properties for free, just as new data show graffiti reports are up nearly 15 percent.

The data also show San Diego responds to graffiti calls equally quickly when low-income and high-income neighborhoods are compared, but that neighborhoods with the most graffiti reports tend to get faster service.

The City Council last month doubled the permanent annual funding for a program where volunteers from the nonprofit Urban Corps eliminate graffiti scrawls on residential properties that request such service.

The city’s Transportation Department has been using “one-time” funds and diverting money from other programs to boost residential graffiti efforts, but the program is now slated to receive adequate funding on a permanent basis.

“The council recognized the ongoing need for this program,” said Gene Matter, assistant director of the Transportation Department.

The city can legally force residential property owners to handle graffiti themselves at their own cost, but officials say the Urban Corps program accelerates elimination of the tagging and boosts the overall appearance of the city.

The program has the greatest effect in the city’s poorest neighborhoods, because that’s where the lion’s share of residential graffiti happens.

More than 1,300 of the 1,624 reports of residential graffiti during the second half of 2020 were in the city’s three low-income council districts: Districts 4, 8 and 9 — all south of Interstate 8.

Meanwhile, a new study shows that reports of graffiti were up 13.4 percent during the second half of 2020, the most recent period for which statistics are available.

City officials said the spike could be the result of more people taking advantage of convenient reporting of graffiti on the city’s Get it Done! tipster app. Another factor could be that more people were working from home and spotting graffiti on neighborhood walks, they said.

The city received 14,328 graffiti reports during the second half of last year, significantly more than 12,631 — the average number of reports for the two previous six-month periods.

A separate analysis shows that response times to graffiti reports on city property are roughly equal across the city, contradicting some speculation that low-income neighborhoods and ethnically diverse areas get slower responses.

The average was also either eight days or nine days in every other council district, except District 1 at 11 days and District 5 at 12 days.

While that could be a disparity based on wealth because Districts 1 and 5 are among the wealthiest in San Diego, city officials said the slower responses were the result of significantly fewer graffiti reports in those districts making it less convenient to respond.

During the three-year period studied, the urban core neighborhoods of District 3 led the city by far with 12,172 reports, followed by eastern urban District 9 with 8,336 and the city’s beach communities in District 2 with 6,915.

City officials said among the most popular places for taggers are University Avenue and Park Boulevard in District 3, and El Cajon Boulevard, which travels through District 3 and District 9.

The equity study only included graffiti on city property and in the public right of way, which comprise about half of all graffiti reports in the city.

City officials said those reports were best to analyze because responses to graffiti on residential and commercial property are often delayed by the need to get permission from property owners, which skews response times.

Graffiti on commercial properties makes up about 20 percent of city graffiti reports. The final 20 percent of reports are graffiti on property controlled by other public agencies, such as Caltrans or San Diego Gas & Electric.

In addition to $300,000 for the Urban Corps program, San Diego spends $800,000 annually on its in-house graffiti crew that handles tags on public property, and $250,000 for two code compliance officers who handle graffiti on commercial property.