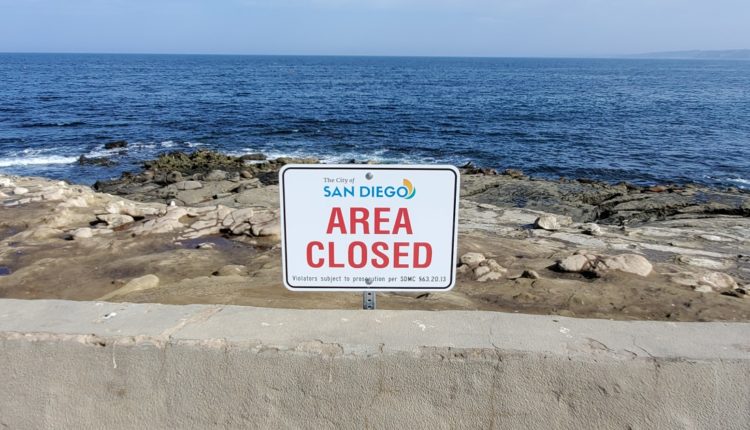 In the predawn of Aug. 11, San Diego city workers were at Point La Jolla installing “Area closed” signs, a plastic water-filled K-rail barrier and a chain across the bluff access stairs to begin a temporary closure of the area. The closure, intended to keep people away from the sea lions that haul out at Point La Jolla, will be in effect until Sept. 15.

Point La Jolla is a rocky area between La Jolla Cove beach and Boomer Beach where sea lions often go on land to rest. It also a sea lion birthing area where pupping season is recognized from June 1 to Oct. 31.

City spokesman Tim Graham said the city gained a temporary emergency closure permit Aug. 10, and crews were onsite before dawn the next morning.

The permit application was filed by the San Diego Parks & Recreation Department to the city Development Services Department — which oversees coastal development permits such as that needed to temporarily close the area — on Aug. 3 after months of reports of beach-goers bothering, and in a few cases harming, sea lions and pups. Graham said Development Services looked at potential environmental effects of having a weighted K-rail on the bluff and determined there would not be a significant impact.

“The closure area is comprised of both sand and bluffs and is bordered by the beach access stairs to the north, the concrete wall along the boardwalk to the east, and a plastic barrier to the south located approximately 25 feet from the end of the metal railing along Boomer Beach,” Graham said. At the southern side of the plastic barrier is a small trail that leads down to Boomer Beach.

A plastic water-filled barrier marks the edge of the closure of Point La Jolla at the southernmost point.

“The idea is to keep the bodysurfing area open,” he said. Should there be interactions between people and sea lions, “we will have two rangers [stationed there] that could get involved.”

“The closure is intended to protect both the public and sea lions during pupping season, a sensitive period of time when sea lions are born and learn to swim,” he said. “Sea lions, especially mothers who are nursing and feeding their young, can become aggressive and cause bodily injury when they feel threatened as a result of visitors that get too close.”

The stairs from which the bluffs were previously accessed are closed by a sign and chain.

In June, the Sierra Club Seal Society and Sierra Club San Diego called on Mayor Todd Gloria to declare an emergency and temporarily close Point La Jolla to the public during sea lion pupping season while keeping the viewing area from an adjacent wall open.

Rather than pursue a closure, the city in early July posted signage at the entrance to Point La Jolla and Boomer Beach. Some signs read “Stay back: Sea lion birthing area.” Others caution that sea lions can bite and that harassing them is against the law. Stenciling placed on trash cans, the sidewalk and the short wall that lines Point La Jolla reads “Do not approach mothers or pups” and “Do not approach sea lions.”

“The action that has been taken … is the evolution of several attempts to control the activities out there in Point La Jolla in relationship to the sea lions,” LaCava said. “Yet people still go right up to the sea lions, put their children next to them, take selfies with them.”

Beach access advocates called the closure idea a “mistake by the city” and said Point La Jolla is a significant area for divers.

Representatives of animal-rights groups said they support the closure and feel it could be a model for any future closures.

After Sept. 15, when the closure is to be lifted, the city will “go through the more methodical open process to talk to the community as to what kind of long-term program we might want to consider,” LaCava said.

In 2014, the city decided to close the nearby Children’s Pool beach during the annual harbor seal pupping season from mid-December to mid-May by way of a chain barrier across the middle-level stairs. The rest of the year, a rope barrier is in place as a visual deterrent to keep people away from the harbor seals. ◆