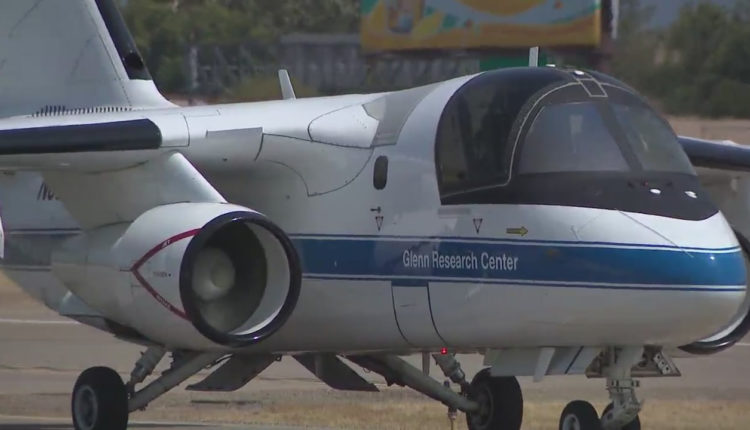 EL CAJON, Calif. — A rare NASA aircraft made its final flight Tuesday before touching down at its new home with San Diego Air & Space Museum.

The S-3B Viking departed NASA’s Glenn Research Center in Cleveland, Ohio, where it had been used almost daily as a flight research aircraft for more than 16 years. The aircraft stopped in El Paso, Texas before making its way toward San Diego County. After a scheduled flyover of North Island Naval Air Station, where it was stationed in the late 1970s, the aircraft made its last touchdown at the museum’s Gillespie Field annex in El Cajon.

Lockheed Martin originally designed the S-3B for the U.S. Navy as an anti-submarine warfare aircraft. The Navy retired its fleet of the aircraft from active duty in 2009.

NASA acquired the S-3B in 2004, and it was completely reconfigured in 2006 for flight research purposes, according to NASA officials. In order to conduct flight communications research, all weapons systems were removed and replaced with civilian avionics, GPS and satellite communications systems.

“One of its major contributions was helping NASA’s aeronautical innovators define communications standards that the Federal Aviation Administration can apply to the unmanned aircraft systems for safe operation in U.S. airspace,” a NASA release stated.

“This old aircraft has been a huge part of ushering in the future of aviation,” says Mike Jarrell, lead of NASA’s Command and Control project. “The S-3B has been a perfect match for our research. It has a nice flat bottom where we can mount a variety of antenna; it flies steady and goes low and slow so we can communicate with ground stations.”

Now, it will join other historic aircraft at the aviation museum.

“The San Diego Air & Space Museum is honored to be the final home of the last flying S-3B Viking aircraft, one of the most iconic the annals of Naval aviation history,” said Jim Kidrick, President & CEO of the San Diego Air & Space Museum. “We are thrilled to display and share it with future generations of visitors to our Gillespie Field Annex in El Cajon. It is a truly worthy and welcome addition to our already impressive collection.”

FOX 5 spoke with the pilot after the aircraft touched down.

“It’s flying beautifully,” said James Demers, chief of Aircraft Operations at NASA’s Glenn Research Center. “It brings a tear to my eye that we have to stop. It actually is flying better than I think it ever has. But it’s time.”

Tom Gibson, who flew the aircraft in his tours with the Navy, said he drove from Yuma to watch it land.