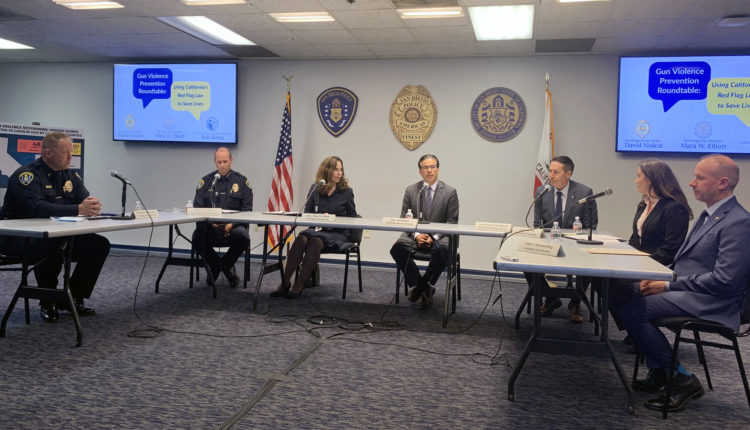 California Attorney General Rob Bonta met with San Diego officials Tuesday regarding the city’s gun violence restraining order program, which Bonta described as an effective, preventive tool he would like to see utilized in other California cities and counties.

The gun violence restraining orders — or GVROs — are petitions seeking to have guns removed from people who may be a threat to themselves or others. If the petition is approved, subjects must relinquish their firearms and are ordered not to purchase any new firearms or ammunition. The initial temporary orders last for about three weeks, then can be extended to up to five years following a court hearing and approval from a judge.

Since the program launched in San Diego, more than 1,000 firearms have been confiscated through GVROs, which the San Diego City Attorney’s Office claims has prevented “multiple violent incidents, including mass shootings.”

On Tuesday, Bonta met with City Attorney Mara Elliott and San Diego Police Chief David Nisleit for a roundtable discussion regarding the inception and continued use of the GVRO program in San Diego.

“San Diego serves as a model of how cities and counties can use California’s red flag laws to prevent gun violence,” Bonta said. “The city attorney, the San Diego Police Department, and the Superior Court all work closely together to effectively utilize Gun Violence Restraining Orders to remove firearms from the hands of individuals who pose a serious threat to themselves or others. This is a program and strategy we can learn from and seek to replicate in other cities and counties throughout the state.”

The state budget recently signed by Gov. Gavin Newsom allocates $1 million to train law enforcement agencies across the state on the use of restraining orders.

According to the City Attorney’s Office, its Gun Violence Response Unit has trained more than 400 agencies throughout the state thus far.