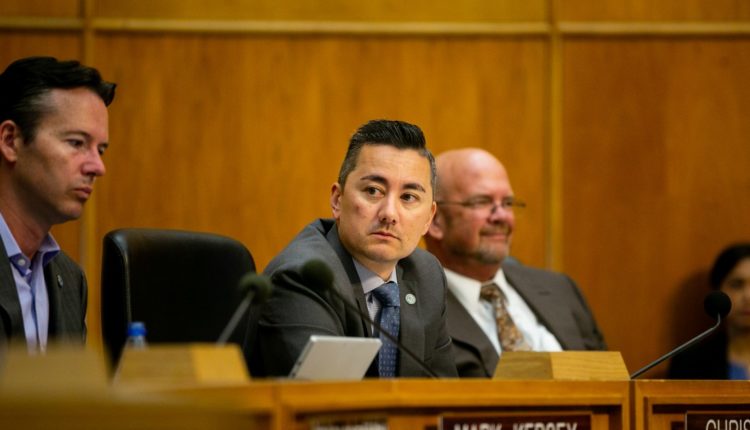 Local Republicans have prioritized retaining their last remaining seat on the nine-member San Diego City Council when it comes up for grabs next year, but the lone Republican in the District 6 race recently dropped out.

Republican consultant Stephen Puetz said Wednesday that the party has every intention of fielding a strong candidate in the battle to succeed Councilmember Chris Cate, who can’t run for re-election after eight years because of term limits.

Democrats have been steadily widening their advantage over Republicans among registered voters in the district, which includes Mira Mesa, Kearny Mesa, most of Clairemont and part of Rancho Peñasquitos.

Through June 1, registered Democrats outnumbered registered Republicans 36,126 to 22,899, with 25,146 voters declining to state a party affiliation.

While the margin was smaller, Democrats also outnumbered Republicans in 2014 and 2018 when Cate won election and re-election by comfortable margins.

But the political dynamics have since changed significantly, including widespread local opposition to Republicans because of former President Donald Trump.

Optimism for whichever Republican enters the race would be based partly on 2022 being an off-year election, when Democrats tend to have much lower turnout than in general election years.

Another factor would be the contention that it makes sense to have an opposition voice at City Hall instead of having a Democratic mayor and a council with nine Democrats and no Republicans.

In March, Cate endorsed as his successor Republican Jocelyn Lomahan, a Rancho Peñasquitos resident. But Lomahan dropped out of the race recently after controversy erupted over whether Rancho Peñasquitos will remain in District 6.

San Diego recently began its once-every-10-years effort to redraw the boundary lines of its council districts based on new census data.

In 2011 a sliver of Peñasquitos was shifted from District 5 to District 6 to help create the city’s first council district where Asians are the largest ethnic group. But many residents in the suburban community want to be reunited.

Consequently the candidates running for District 6 won’t know for several months which communities will be in the newly drawn district going forward, including the June 7 primary next year and the November 2022 general election.

Cate, the council’s only Asian member, could be replaced by a non-Asian. Of the four candidates in the field, only Lee is Asian. Roughly 20 percent of District 6’s registered voters are Asian, while 33 percent of its overall population is, according to local government estimates.

Lee, the executive director of Pacific Arts Movement, has been endorsed by a wide cross-section of the city’s Asian community. His campaign website focuses on creating a more inclusive city by addressing inequities and boosting opportunities.

Crosby, a prosecutor in the city’s misdemeanor crimes unit, says on her campaign website that she will prioritize safe neighborhoods, gun violence and protecting the rights of domestic violence victims and survivors of child abuse.

Day, who worked at City Hall as a department director overseeing community engagement and police oversight, says he will prioritize the issues of economic inequality, child care and affordable housing. He recently took the controversial stand of vowing not to accept campaign contributions from the city’s police officers’ labor union.

Hough, who lost to Cate in a 2018 runoff, has focused his campaign on upgrading the district’s streets, parks and recreation centers. He has a long history as a local leader on environmental issues.

Hough and Lee live in Mira Mesa. Day and Crosby live in Clairemont.

The first disclosures of fundraising in the race are due July 31. The maximum individual contribution increases from $600 to $650 this election cycle.