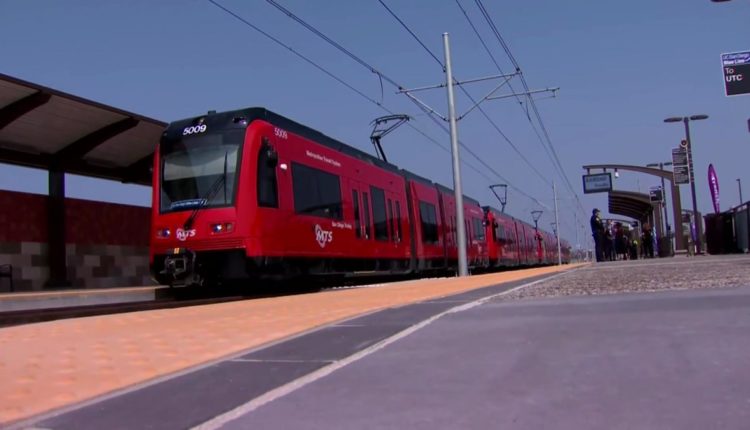 The San Diego Association of Governments (SANDAG) and Metropolitan Transit System (MTS) invited the public to a sneak peek of the Mid- Coast Extension of the UC San Diego Blue Line Trolley on Saturday.

Attendees had the opportunity to ride a portion of the trolley extension before it opens in November.

The $2.1 billion Mid-Coast Extension is a SANDAG priority project. It will add 11 miles to the UC San Diego Blue Line Trolley, extending service from Downtown San Diego north to the University Community. The extension includes nine new trolley stations, three of which are located along Morena Boulevard.

TransNet, the half-cent sales tax administered by SANDAG, will fund approximately half of the project, with the remaining funding being provided by a grant from the Federal Transit Administration.

Major construction for the extension began in 2016, and the project remains on budget and on schedule.

“There are so many positives to a project like Mid-Coast,” said Mayor Todd Gloria, SANDAG vice chair at an event for public officials earlier in the week. “It will have a transformative impact on regional transit connectivity.

The first several passengers aboard the new extension of the Mid-Coast Trolley took a ride on the new tracks in celebration of yet another milestone.

“Among many benefits, this trolley expansion will create better job opportunities for families, and better access to education for students,” he continued. “It will help our fight against climate change and at the same time boost economic activity.”

There is no public access to the stations or the tracks until opening day. Construction is still ongoing on portions of the extension and active trains will be on the tracks. Testing and training on the extension will take place for approximately three more months to ensure the system is ready to carry passengers.

To support the extra service, MTS has added 45 new trolleys built by Siemens Mobility and partially funded by TransNet.

MTS added 128 new positions including train operators, security, maintenance, IT and more to manage the extension. MTS has also made significant enhancements to its bus service to align with the trolley extension. The agency will replace two existing express routes, modify seven exiting east-west connections and implement three new routes that connect to the trolley.