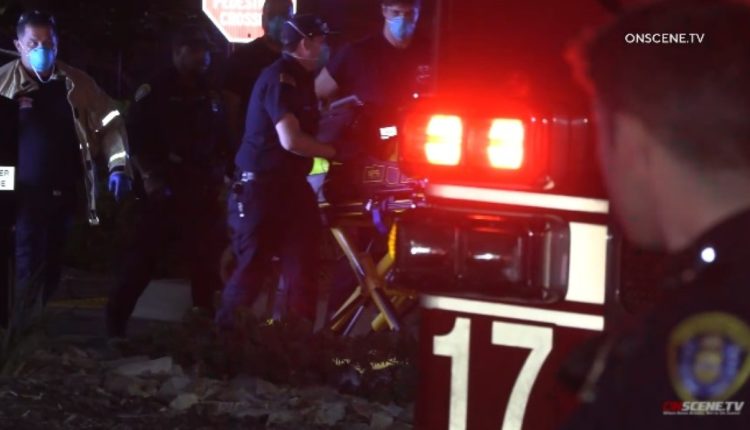 At least one San Diego police officer fatally shot a man Friday night in City Heights following a vehicle and foot pursuit with a carload of men believed to be involved in an injury shooting minutes earlier, according to police.

The police shooting of the man, who officers said was armed with a gun, occurred about 9 p.m. on El Cajon Boulevard just west of 54th Street, according to Officer John Buttle and homicide Capt. Rich Freedman.

Medics took the man to a hospital, where he died, Freedman told OnScene TV early Saturday morning. The man’s name and age were not released.

About 10 minutes before the shooting, officers were sent to a call about an assault with a deadly weapon on 60th Street and University Avenue, near the Rolando neighborhood, according to Buttle and Freedman. Officers found the victim of that shooting a few blocks away suffering from multiple gunshot wounds.

That victim was eventually taken to a hospital and was in stable condition Saturday morning, Freedman said.

Witnesses to that first shooting — which reportedly happened at or near the Food 4 Less in the University Square strip mall — described to police a vehicle in which the shooter fled, Freedman said. Shortly thereafter, a police helicopter spotted a vehicle matching that description driving erratically.

The helicopter crews directed patrol officers to the car, and officers pulled it over near 54th Street and El Cajon Boulevard, Freedman said.

“The vehicle yielded, but one of the passengers ran out of that vehicle,” Freedman said. “The officers and (helicopter crew) both described the male as running with a gun in his hand.”

Freedman said he had not yet reviewed body-worn camera footage or surveillance video, so he did not know exactly what happened next. But there was a confrontation between the man and officers in the drive-thru of a Japanese restaurant.

“According to some of the officers on scene, they described him pointing a weapon at them,” Freedman said. At least one officer opened fire on the man.

Footage from OnScene TV showed the man’s limp arm dangling from the gurney as paramedics loaded him into an ambulance. According to police radio traffic, a doctor pronounced him dead shortly after he arrived at the hospital.

As the shooting was unfolding, other officers detained three other men in the car that had been stopped, Freedman said. Inside that car, the officers reported finding two guns.

Freedman said the car also appeared to match the description of a Honda sedan that was involved earlier Friday evening in a reported shooting near Belmont Park in Mission Beach. ABC 10News reported that shooting occurred around 5 p.m. in the parking lot of the beach, and that no victims were immediately located.