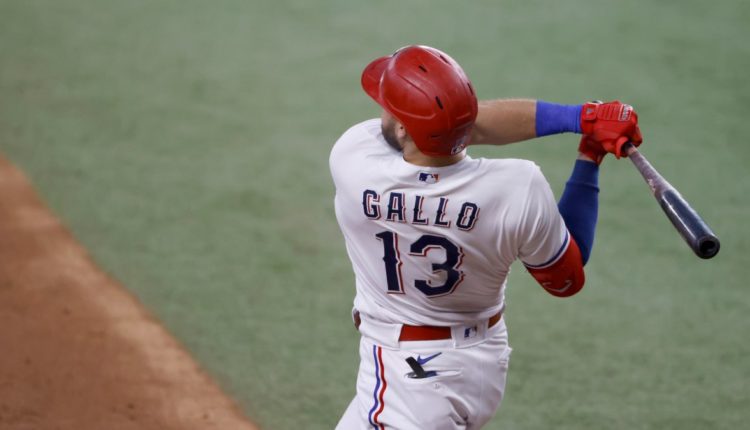 The MLB trade deadline is one week away. The Padres are going to be active. A.J. Preller always is.

Right now the Friars are in firm control of a Wild Card spot, which is not a bad spot to be in. But, things could be better. In fact, to win it all they’ll have to be better.

Consider they have three starting pitchers on the Injured List (Dinelson Lamet, Adrian Morejon and Mike Clevinger – Ryan Weathers is about to come back off so that’s promising) and two more who can’t seem to find anything resembling consistency (Blake Snell and Chris Paddack, although both were fantastic in their last outing).

Now Yu Darvish is dealing with back and hip tightness so they only have one reliable starter in Joe Musgrove, and STILL this is a playoff-caliber club … but they flat-out need to get some more starting pitchers.

San Diego’s bullpen is on pace to throw more innings than any relief corps in the history of Major League Baseball. They need quality innings-eaters, preferably with some playoff experience.

But, you know A.J. He’s not going to just settle for addressing the obvious needs. He’s looking to upgrade as many places as possible and there are impact bats out there to be had. So, here are a few trade suggestions to make the Padres even better (dare I say, championship favorites?) down the stretch:

The Twins need to ask themselves a very difficult question: Is this year the aberration or were the last two years the aberration?

Minnesota was in the playoffs the last two seasons and won the A.L. Central with 101 wins in 2019. This year they’re 14 games under .500 and nothing has gone right. Odds are this year is closer to what they really are.

Even when they were in the playoffs they couldn’t win. This franchise hasn’t won a post-season game since the 2004 Division Series. It’s been swept out of six straight playoff series so whatever they’ve been doing hasn’t been working. It’s in their best interest to either lock up a few key pieces with extensions or send them out of town while their value is at its peak.

They traded Nelson Cruz to Tampa Bay so it’s looking like their fire sale might be on.

Berrios is one of the best starters on the market. He’s controllable through 2022 and has said he’s interested in testing the free agent waters. What makes him most attractive to the Padres, though, is his durability. He’s never been on the IL in his six big league seasons.

It seems counter-intuitive to give up a pitcher for a pitcher when you’re trying to add pitchers (I have an answer for that later in this piece). The Twins reportedly want a pre-arbitration Major League player and a couple of top prospects. That’s a sky-high asking price but the Padres have the depth in the system to make it work.

Paddack has all the talent in the world and for some reason can’t put it together with any consistency. He might be a “change of scenery” candidate. Marcano is a solid defender with good bat-to-ball skills who’s having a nice year at AAA El Paso as a 21-year-old. Ona had elbow surgery in May and is expected to return soon. He’s always had good natural power and could play outfield or be a future DH candidate to replace Cruz in the American League.

For Preller, Joey Gallo is like that one girl you have a crush on in college. You know the one. The cutie you have a few classes with and flirt with a little, but haven’t asked out yet. She has a boyfriend she says she’s happy with but you know it’s never really going to go anywhere and she’d be much better off with you. Eventually, you muster up the courage to ask her out.

Gallo is a 2-time All-Star and Gold Glove-winning outfielder who has been demolishing baseballs for the last month and a half. He has ridiculous raw power and putting his left-handed thunder in the lineup between Fernando Tatis Jr. and Manny Machado would make life miserable for opposing pitchers.

One-stop shopping is always nice so packaging Gibson in the deal would help the rotation issue. I know, Statcast people aren’t sold on Gibson’s breakout year. He went to his first All-Star Game at the age of 33, in his 9th big league season, and there are serious question marks about his sustainability. But, a lot of his success comes from the fact he added a really good pitch (a cutter) and ditches some old, ineffective offerings, so for the rest of this year and the very affordable $7 million he’s owed in 2022 it’s worth gambling on him.

Weathers is a tough kid and I love him. But, to get something you need to give something. Mateo just hasn’t been consistent this year and while losing his elite speed off the bench will hurt, it also puts either Wil Myers or Tommy Pham on the bench each night (Gallo is the everyday starter on the corner) and that’s a heck of a lot better pinch-hit option that Mateo is. Lawson could be a very good starter but he’s coming off Tommy John surgery. Ornelas has tools but hasn’t been able to put them together quite yet. Humphries is a 25-year-old reliever at AA San Antonio who has a good fastball and is likely a swingman-type in the Majors.

Jon Gray has long been, in my opinion, one of the more underrated pitchers in the game. Pitching his entre career at Coors Field he has an ERA of 4.48. That’s like 1.80 at most other ballparks (general estimate). He knows the National League West, which is nice given how many games against the Dodgers and Giants are left, and since he becomes a free agent after this year he won’t take a huge return. Knehr has done an admirable job in two spot starts (which were basically openers) with the Padres but is not part of their long-term plans.

Plus, after what Colorado got back for Nolan Arenado, the Padres could probably send the Rockies a couple buckets of baseball and a case of Ballast Point and land Gray.

One thing to keep in mind: Gray was on the 10-day IL in June with elbow fatigue but since coming off he’s made five starts, allowing eight earned runs in 30.0 innings. That looks like a healthy arm to me.

But, just to make sure, here’s one more thing to do that’s not a trade:

Bring the Rancho Bernardo High kid home! The former All-Star only threw 3.1 innings in 2020 with the Braves due to injury. He held a showcase last week that the Padres attended and is still looking for a team to sign with. If Hamels has anything left in the tank, and given how hard he competes I wouldn’t be surprised if he did, it would be a low-cost dice roll for a guy who’s won a World Series MVP and has a wealth of post-season experience.

Hey Derek, You Idiot, What About the Bullpen?

Good question and I’m glad you asked it. No bullpen moves here because they’re getting Matt Strahm back soon (he just went out on a rehab assignment) and are looking seriously at putting Dinelson Lamet in a reliever role when he’s ready to return from the IL. Those two guys alone are like making two impactful trades so the emphasis has to be on the starting rotation and that big dude who hits bombs.

Plus, if they follow this plan, look at the rotation options they’d have next year:

Maybe even MacKenzie Gore if he can get it all figured out. That’s one heck of a crew to run out when you’re trying to repeat as World Series champs.