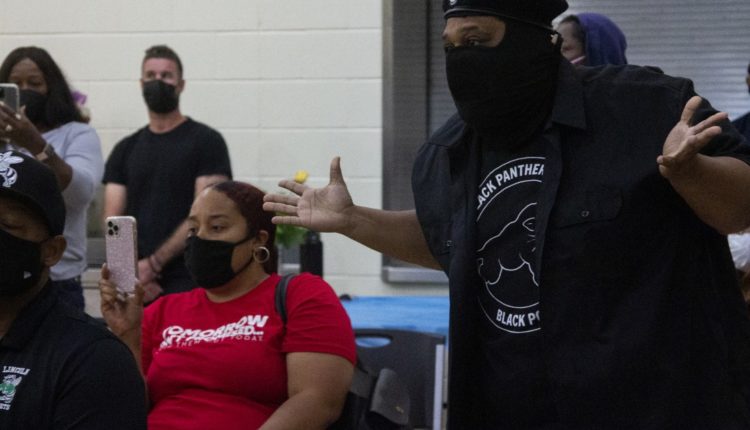 A community forum where school and public officials were supposed to be answering people’s questions about Lincoln High School ended abruptly on Monday night after a couple in the audience shouted at panelists for several minutes and physically approached them.

The couple, Shamiko Harris and Tonja Daniels, are parents who had sued San Diego Unified in 2019, alleging that the district had failed to protect their sons from being bullied and beaten at Lincoln High School and that the district had police arrest Harris. Last year a judge agreed with the school district on virtually all of its objections to the lawsuit.

The public forum came about after Montgomery Steppe wrote a letter to the school board in May, raising concerns and questions about leadership turnover at Lincoln, a predominantly Latino school where 85 percent of students are socioeconomically disadvantaged.

Montgomery Stepped questioned the district’s handling of Lincoln and the school’s academic outcomes. One of the demands in her letter was for the district to hold a public forum so community members can provide feedback on Lincoln.

Her letter sparked a public argument between Montgomery Steppe and Whitehurst-Payne about how Lincoln should be viewed in the community and what should happen to improve the school. Weeks after the letter was released publicly, Whitehurst-Payne called the letter an “attack on our students” and demanded that the council member apologize.

Monday night Whitehurst-Payne and Montgomery Steppe talked with each other privately before the forum began.

The disruption at the meeting happened about halfway through, when Harris claimed that the event moderator, Christopher Rice-Wilson, associate director of Alliance San Diego, had not correctly asked a question Harris submitted to be read to the panel.

Harris and Daniels then started shouting at Rice-Wilson and the panelists, talking about their lawsuit.

“They’re never held accountable, and we’re tired of it!” Daniels said. “We’re not gonna sit there … and have a dog and pony show.”

At times Rice-Wilson tried to bring order to the event, but Harris and Daniels continued shouting.

“Can we be civil?” Rice-Wilson said.

“I’m being civil. You be civil,” Harris said.

There also was an altercation between Harris and another audience member, who at one point shouted at Harris, “Bro! Kick back bro! Bro, please kick back!”

The panelists initially remained silent as they watched Harris and Daniels. Eventually the couple walked toward the front of the room where the panelists were.

At one point at least two people stood in front of the panelists with their arms out as if to keep people away from the panelists.

After a few minutes, Brown got up and left the event hall through a side door. Soon after other people helped escort the other panelists out and to their cars.

There were no security personnel or uniformed police visible at the event.

In an interview after the event ended early, Rice-Wilson said it was unfortunate that the forum was interrupted before deeper questions by the audience could be asked of the panelists.

“Unfortunately, uh, we were interrupted by a family that has some very real heartbreak with the situation that happened to their child in the public schools, and they haven’t gotten the answers they’re looking for from the leadership,” Rice-Wilson said. “And you know, this is always a risk with a public forum, that somebody brings their issue to be addressed because they have not gotten satisfaction previously.”

Before the interruption, panelists answered questions about their vision for Lincoln and its students.

Agudelo said Lincoln intends to have all its students complete the coursework necessary to go to California’s public universities, have a clear post-high school plan, visit at least one in-state university and one out-of-state university, and participate in an internship.

When asked what school leaders are doing to get Lincoln students caught up to grade level, Brown and Agudelo listed multiple projects, including a summer bridge program to better connect freshman students to Lincoln; placing students in cohorts so they can have closer relationships with other students and teachers; and working with the elementary and middle schools that feed into Lincoln to better align their academic work with the high school’s.

When asked how Lincoln can earn the trust of parents who have chosen to send their kids to other schools, Whitehurst-Payne said that when she knocked on doors of families who had chosen a different school over Lincoln, several times it was the parent’s choice; the student wanted to attend Lincoln.

“It’s about building a culture of success and bringing in those reluctant folks who realize that we have some success there,” Whitehurst-Payne said. “I believe we can win those students back.”

Barrera said much of a student’s success comes from parents, and if active and involved parents choose to have their kids attend neighborhood schools like Lincoln, rather than leaving for other schools, they can bring a lot of investment and influence to benefit Lincoln.

“If you give it a chance, if you as a parent bring that same level of investment, what you’re probably going to see is not only that your student will thrive at Lincoln, but that Lincoln will become a greater and greater school in the process,” Barrera said.

Rice-Wilson asked the panelists what role parents can play in the success of Lincoln, saying that parents at Lincoln can’t be held to the same expectation for involvement as parents north of Interstate 8.

Barrera said schools need to equip parents with simple strategies they can use to keep their children engaged in learning, such as asking their kids to explain to them what they’re learning.

The forum, held at the George Stevens Senior Center, was organized by Community Advocates for Just and Moral Governance, NAACP San Diego, the Association of African American Educators and the Black American Political Association of California San Diego chapter.

San Diego Unified interim Superintendent Lamont Jackson attended the forum as an audience member but did not speak.