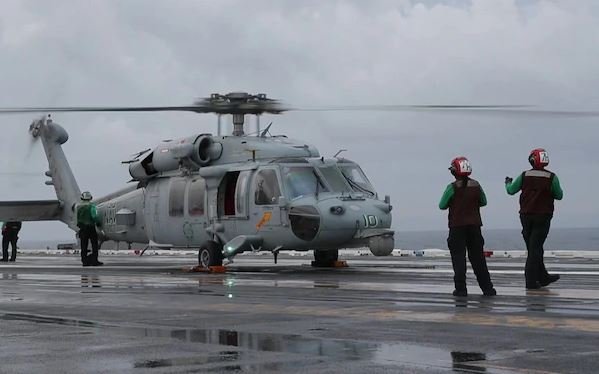 Officials with the U.S. Navy said five sailors aboard the aircraft carrier USS Abraham Lincoln were also injured in an incident involving a helicopter that crashed into the sea on Tuesday.

Search-and-rescue operations are ongoing about 60 nautical miles off the coast of San Diego for five crew members who were on board the MH-60S chopper that crashed into the sea at about 4:30 p.m. PST.

One U.S. service member was rescued but five others remain missing after a U.S. Navy helicopter crashed about 60 miles off the coast of San Diego. The search efforts continued overnight and into Wednesday morning. NBC 7’s Audra Stafford shares details.

One crew member was rescued on Tuesday. That person has been transported ashore and is expected to survive the incident.

Injuries to three of the sailors from the Lincoln were not serious, and they are being treated aboard the ship. Two others had more severe injuries and were taken ashore for treatment.

UPDATE 1: Currently, one crewmember has been rescued and search efforts continue for the other crewmembers of an MH-60S helicopter embarked aboard USS Abraham Lincoln (CVN 72) that crashed into the sea off the coast of San Diego, Aug. 31: https://t.co/4O9iDV1jNx (1/2)

“The aircraft, from Helicopter Sea Combat Squadron (HSC) 8, was operating on deck before crashing into the sea,” the U.S. Third Fleet said in an news release sent out on Wednesday shortly after 9:30 a.m.

Military officials said on Tuesday that the 64-foot aircraft, which weighs a little over seven tons when it’s empty, crashed during “routine flight operations.” The helicopter is assigned to USS Abraham Lincoln, a Nimitz-class aircraft carrier homeported at Naval Air Station North Island, on Coronado.

The MH-60S is a versatile aircraft that typically carries a crew of about four and is used in missions including combat support, humanitarian disaster relief and search-and-rescue.

An investigation of the incident is underway, according to military officials.

Check back here for updates on this breaking news story.

The Associated Press contributed to this story — Ed.