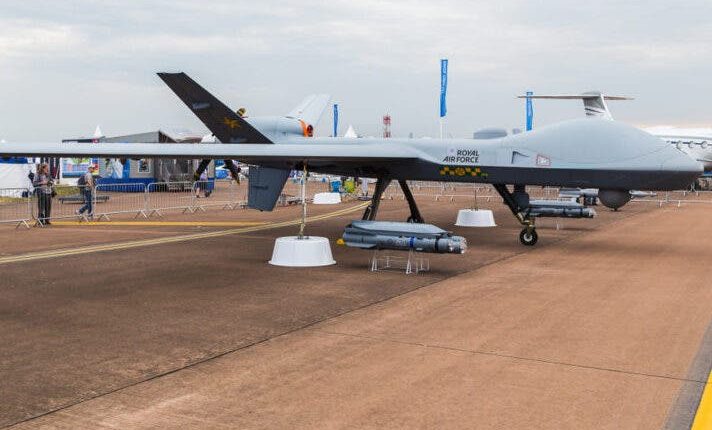 A military-grade drone demonstration, scheduled over the city of San Diego, was rerouted to the desert last year after regulators pushed back. It drew international attention because it would have helped open the skies above major U.S. cities to new, unprecedented forms of surveillance.

Although the defense contractor that builds the drone says it has no immediate plans for a re-do, developments at the federal level could make military-grade drone patrols in civilian airspace a more common occurrence in Southern California, Jesse Marx writes.

General Atomics walked through some of those developments in a report and identified the obstacles that could prevent flights over cities like San Diego going forward. Notably, the company identified public perception as the key hurdle.

For years, the FAA has been trying to accelerate the integration of drones into civil and commercial society by partnering with state, local and tribal governments, as well as drone operators and manufacturers. But there remain questions about the safety of such devices and anxiety over the prospect of repurposing vehicles that were central to U.S. counterinsurgency efforts abroad.

Last summer, federal authorities dispatched one such drone to monitor protesters and the civil unrest triggered by the murder of George Floyd — a decision that was denounced by civil liberties groups and some members of congress.

Both CCAs are trying to do the same thing — transition the cities they represent to use 100 percent renewable electricity (powered by solar, wind or other zero-carbon energies) faster than utilities are able or willing to do. But the county vote represents the settling of a competition over a large ratepayer base which could help the winning agency spread out its energy costs and add purchasing power to cut more deals on renewable projects, like the 600-acre solar farm announced near Jacumba Hot Springs earlier this month, according to Times of San Diego.

With the 3-2 party-line vote, customers in the county would automatically shift to San Diego Community Power’s energy rates unless they opt to stay with SDG&E come 2023. Republican Supervisors Jim Desmond and Joel Anderson, who both represent large swaths of rural unincorporated county land, opposed the decision.

Gaspar Gets a New Gig

A spokesman for the North County health district, which runs hospitals in Escondido and Poway, told VOSD that Gaspar was last week named president and CEO of the Palomar Health Foundation after leading the organization on an interim basis for months.

Gaspar, who as a North County supervisor pushed for bolstered behavioral health services at facilities including those run by Palomar Health, had joined the health care district as its senior director of government relations in March. Soon after taking the new position, she was asked to temporarily lead the foundation.

Have a question about local governments or schools, coronavirus rules or even a random San Diego thing you’ve been wondering about for years? VOSD is taking your questions – and we’ll take a stab at answering them in future Morning Reports.

Please share your questions here and keep reading the Morning Report. After all, we might answer one of your burning questions in a future newsletter.

This Morning Report was written by Jesse Marx, Lisa Halverstadt and MacKenzie Elmer, and edited by Megan Wood.

Voice of San Diego is a nonprofit news organization supported by our members. We reveal why things are the way they are and expose facts that people in power might not want out there and explain complex local public policy issues so you can be engaged and make good decisions. Sign up for our newsletters at voiceofsandiego.org/newsletters/.