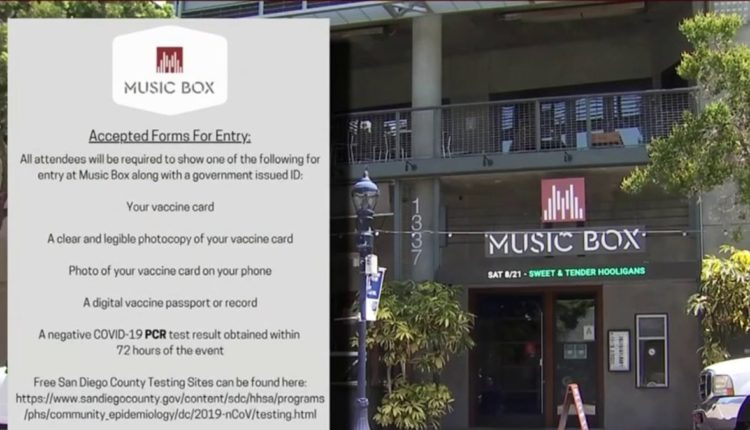 If you’re going to a big indoor concert net month, you may want to bring along your vaccination card.

The state of California is requiring all indoor venues that host more than 1,000 people to make sure people are either vaccinated against COVID-19 or have had a negative test result within 72 hours of the performance they’re attending.

NB C7 contacted several music venues in San Diego but had a hard time getting reaction from management.

The Music Box — with a maximum occupancy under 1,000 — in Little Italy posted a message on its Facebook page that it would require proof of vaccination or a negative test result for all guests starting Friday, a full month before the state’s requirements kick in.

“I think it’s the right thing to do” said Fred Ruben, who was checking out the Music Box listings posted outside the concert hall. “They’re doing this for the benefit of the people that are going into their [club], and they’re doing it for their own benefit because they don’t want someone pointing the finger at them later, saying, ‘I caught it there.’ ”

Other people outside the venue told us they also support the effort.

“I think it’s a great idea,” Meg Brown said. “I really respect businesses for stepping up and regulating. I think, for the safety of others, It’s really important, So I support it fully.”

Tim Rayner, who is attending a concert in Orange County later this week, said he would gladly show his vaccination card when he goes. Rayner told NBC7 he does not consider it a violation of his privacy or an imposition on the venue’s employees.

“They card people to be old enough to consume liquor, so I think it’s no more policing than that,” Ranyer said.

Some people on the Music Box Facebook page gave the venue a thumbs-down, however, for instituting vaccine checks. One wrote, “Never going there again”; another posted, “Lame. Just another business run by weakness falling in line with global strategy.”

Most of the online reaction was positive, though.

“Best decision ever,” wrote another.

“Bet you sell out,” was also posted.

The Music Box isn’t the first music venue in San Diego to decide to check customers’ vaccine status. Soda Bar in North Park has been doing it for the past 10 days, saying it was doing so to protect the health of customers, performers and staff.

NBC 7 contacted several other local venues but none of the managers felt comfortable speaking out on the issue. A couple of them, though, who did not want to be named, said if the state or county told them they had to check vaccine cards, they would do it, but they would not institute a mandate on their own.

NBC 7 received this statement from Michael Rapino, president and CEO of Live Nation Entertainment, one of the country’s largest concert promoters:

“Vaccines are going to be your ticket back to shows, and as of Oct. 4, we will be following the model we developed for Lollapalooza and requiring this for artists, fans and employees at Live Nation venues and festivals everywhere possible in the U.S.”

Are some San Diego County freeways cleaner than others? – CBS News 8