Are some San Diego County freeways cleaner than others? – CBS News 8 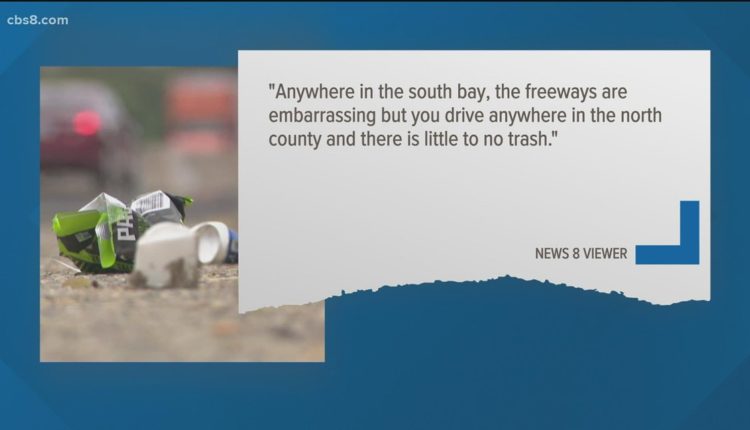 SAN DIEGO COUNTY, Calif. — News 8 recently received an email from a viewer about trash on the freeways, which read in part:

“Anywhere in the South Bay, the freeways are embarrassing but you drive anywhere in the North County and there is little to no trash.  I’ve been hit by debris on the 5 North in Imperial Beach.  Yet when I drive to Carlsbad, it’s surprisingly spotless.”

So News 8 drove around San Diego County on freeways from north to south and noticed it was pretty clean from Carlsbad to Encinitas and further south. But when we drove through parts of South Bay near Chula Vista and National City, our crew did notice more patches of roadside litter.

“We do not discriminate with regard to location,” said Senior Transportation Engineer Shawn Rizzutto with CALTRANS. “All of our employees are focused on maintaining, which includes litter and debris, throughout the entire county.”

Freeways throughout San Diego and Imperial counties are assessed every quarter with a rating system based on how much recurring trash and litter are generated in certain areas.

During this quarter, the following sections of freeway received a ranking of “poor”:

•    I-5 from Imperial Beach to downtown San Diego

“We pay particular attention to these locations because we know they’re problematic for litter and debris,” said Rizzutto.

“Litter is a priority every day for us,” said Rizzutto. “Our maintenance workers who work out on the freeways and highways, they take a lot of pride in their work and they want to do a good job.”

CALTRANS has seen an increase in roadside litter over the past year and a half.

“The reality is that more litter is being generated as a result of the pandemic.  And our eating practices, our packaging, single-use plastics, all of those things contribute to the litter,” said Rizzutto.

One of the leading culprits to freeway litter is untarped and unsecured truck loads.

“We’ve all seen it where you’re driving down the road and stuff is flying out of the back of a pickup from an untarped load,” said Rizzutto.  “So it’s really important for each individual to take ownership and secure their load.”

According to him, sometimes littering can happen unintentionally.

“Sometimes it’s inadvertent.  It just happens,” said Rizzutto.  “Sometimes you roll down your window, and there is a napkin in there and it blows out.  All that gets deposited on the side of the road.”

Above all, CALTRANS wants the public’s help to keep litter off San Diego freeways.

“It is an enormous problem,” said Rizzutto. “It’s a joint effort.  Everybody has to work together to solve this problem.”

If you have any issues you’d like to report to CALTRANS, you can fill out a customer service request here.