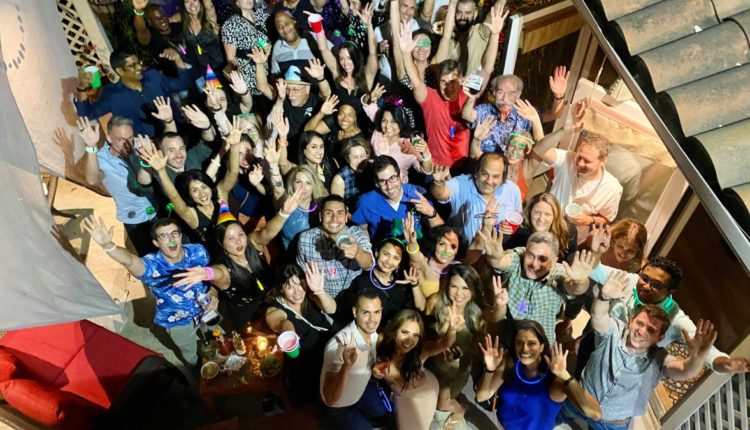 Dr. Tim Morris traded blowing out candles on a cake for volunteering at a Petco Park vaccine drive on his 60th birthday in January of 2020 – a decision he says he’ll never regret because he knew he wasn’t the only one making it.

“ICU staff worked all the holidays,” said Morris, a pulmonologist and ICU doctor at the University of California San Diego Medical Center in Hillcrest. “Birthdays, Christmas and New Year’s and everything.”

He never thought he’d get a second chance to celebrate his birthday over one year later, but “now that COVID has settled down and the heat is off of us, we decided we’re going to get together and celebrate all these holidays at once,” he said, snapping the plastic handles of a plastic storage bin labeled “Halloween” shut.

The doctor played host Saturday night as almost every corner of his San Diego home’s main floor was adorned in decorations to celebrate most major holidays.

Shamrock garlands hanging from trees and a keg of Guinness beer for St. Patrick’s Day, American flags and barbeque for The Fourth of July, bats and spider cutouts for Halloween, a snow-capped village and Santa figurines for Christmas, glittered headpieces and foil horns for New Year’s Eve, pink balloons spelling “Be Mine” for Valentine’s Day, and last, but certainly not least for Morris, a patio corner with hats and banners dedicated to birthdays.

“I began to talk about this to the nurses in the ICU and the more we talked about it, the more we got excited,” he said. “It started off as a relatively small group…now I think that there are about 250 people that know about this party.”

The country is well on its way out of the pandemic, but for health care workers, this moment is bittersweet as they’re realizing just how much they’ve missed out on.

Watch ⁦⁦@nbcsandiego⁩ @ 11p for how one local ICU doctor is getting creative in making up for lost time. pic.twitter.com/zAhpfcmy8N

He told NBC 7 they’re not just holidays to him and his UCSD doctor, resident, nurse, technician, and respiratory therapist colleagues – they’re memories and milestones they would’ve shared together in a normal year, even if at the hospital while on call.

But he said 2020 was far from normal, and they missed out on the moments while risking their lives to save others.

“I had somebody die right in front of me and I don’t think I’ll ever get over it,” said Morris. “I know it’s part of my job and that’s just what happens, but if the pandemic hadn’t happened, that gentleman would be alive. That was one of the few times in my career that I had to just take a second…I just walked over into a corner of a room and I just had to sit there for a second and just gather myself before I could go on because there were other people there that needed help.”

Parents in Chula Vista are expressing concerns after their young children were tested for COVID-19 without their presence. NBC 7’s Dana Griffin speaks to one South Bay mother on the matter.

At the height of the pandemic, Dr. Morris joined a group of doctors to travel to Tijuana, Mexico to help treat COVID-19 patients in a hospital severely lacking ventilators, PPE and beds, all while continuing to monitor his own patients back in San Diego.

“It was a real eye-opener because the Mexican doctors had a tiny fraction of what we have as far as resources, but they are so dedicated,” he said.

As cases surged and more space in hospitals was dedicated to treating COVID-19, health care workforces across the U.S. were stretched thin with longer shifts, more workload and less time off.

Dr. Morris told NBC 7 some medical staff in his ICU chose to live apart from their spouses and children for months to prevent transmitting the virus to their families.

He said most of the suffering went and continues to go unseen or unacknowledged, comparing the hidden trauma to the experiences of war veterans.

When a passenger fell down from low blood sugar on a flight to Greece, LSU medical students Lauren Bagneris and Heather Duplessis stepped up and took care of her. The students joined LX News to share their story

“A lot of them didn’t get to tell their stories because people would say, ‘No, we don’t want to hear about that, that’s over, let’s just move on,’ and I kind of feel there’s some risk of that,” he said. “Going into those rooms was scary and we all did it and no one said no and I thought that we should be able to tell that story.”

Along with his decorations, Dr. Morris stapled four white posters to his family room walls, attaching markers for his guests to write with.

He told NBC 7 the only way he got through the past year and a half was knowing the people he was working shoulder to shoulder with every day could understand how he was feeling.

NBC 7’s Joe Little was there when 100 SDUS nursing students turned their tassels at an in-person ceremony on campus.

“We relied on help from each other and that was a huge part of getting through this. We all felt like we were there doing important work and saving people and we recognized that,” he said. “We saw it on each other’s faces, and we knew that’s what we were there for. While this was a terrible, terrible time, I don’t think I’ve ever felt closer to the people I’ve worked with.”

People who, after risking their lives for over a year, were finally able to come together to celebrate, reflect on the obstacles they overcame, remember those they lost and make up for so much lost time.