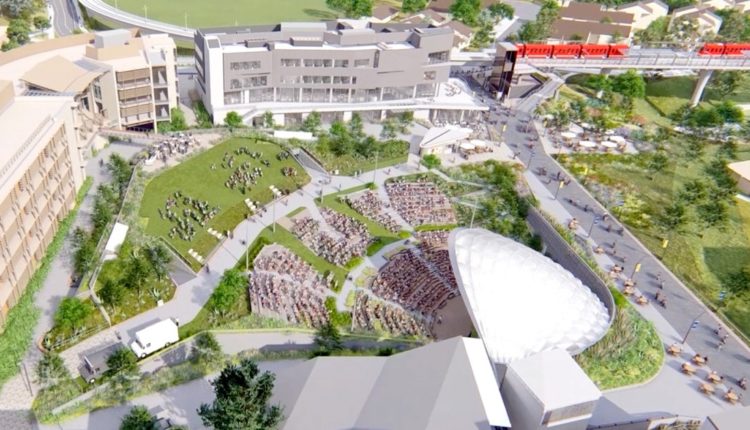 A 2,850-seat amphitheater under construction at UC San Diego will be named after La Jolla philanthropists Daniel and Phyllis Epstein, who are giving the university $10 million to help create the venue.

The Epstein Family Amphitheater is scheduled to open in fall 2022 next to a Blue Line trolley station that will begin operating later this year in the Pepper Canyon area of UCSD.

The station and amphitheater are part of the “front door” the university is building to make it easier to enter and leave the La Jolla campus and to create a more welcoming feel for the public. The area also will feature a major restaurant in the Design and Innovation building, a sweeping structure that is nearly finished.

The site will guide people to an adjoining music, art and theater district and to UCSD’s Geisel Library. It also is meant to give the university a more attractive and clearly defined heart.

“The fact that someone can step off the Blue Line trolley and be at the amphitheater speaks to opening the university to a much more expansive and inclusive set of people, which is exciting,” Daniel Epstein said in a statement.

Epstein founded ConAm, a San Diego-based real estate company. He and his wife previously contributed to ArtPower, a performing arts space at UCSD, as well as the San Diego Symphony.

The university says the open-air amphitheater is designed to handle everything from rock concerts to classical quartets and theatrical dance and will stage more than 300 performances a year.

Phyllis Epstein described the amphitheater as a chance to enlarge the scope of what UC San Diego brings to the community. “From the day we moved here 36 years ago, I said I would get involved with the university, and it has brought me much joy,” she said in a statement. “What I get back is a sense of wonder, learning about things that I never knew existed. I am particularly thrilled about the teaching and learning opportunities the amphitheater will provide to students and the community. To learn, to enjoy, to discover the arts — what better gift can you give?”

Like the new Rady Shell that’s about to open on San Diego Bay, the centerpiece of the amphitheater will be an acoustic shell that can be easily seen by people on campus.

“The Epstein Family Amphitheater brings us one step closer to UC San Diego becoming a destination for arts, entertainment and culture, in addition to education and health care,” Chancellor Pradeep Khosla said in a statement.

In addition to providing a venue for global talent, the university says it is committed to making use of the space for its theater, dance, visual arts and music students to perform and gain hands-on experience.

Todd Schultz, president and chief executive of the La Jolla Music Society, which hosts performances like the upcoming SummerFest at the Conrad Prebys Performing Arts Center on Fay Avenue, said the addition of the Epstein Family Amphitheater to La Jolla is “very exciting.”

“New venues add to the broader cultural makeup of who we are as community,” Schultz said, “and each incremental addition has an exponential effect on our cultural opportunities and how we work together as organizations and how we grow as a community.

“The more opportunities people have to experience the arts and performances and artists, the more that will extend out to new people and into new parts of the community … making [San Diego] more and more of a cultural destination.”

Schultz added that he knows “Dan and Phyllis quite well and I know that they are huge lovers of the arts. … I always like to go to a venue where we in the community know the people who have made it happen. There’s a warm feeling to that experience.”

News of the Epstein gift came less than 10 days after another La Jolla couple, Joe and Clara Tsai, donated $220 million to six major universities, hospitals and science centers, including La Jolla-based UCSD and the Salk Institute for Biological Studies. That money will be used to study the biology of elite athletes in hopes of gaining insights that will widely improve people’s health and longevity.