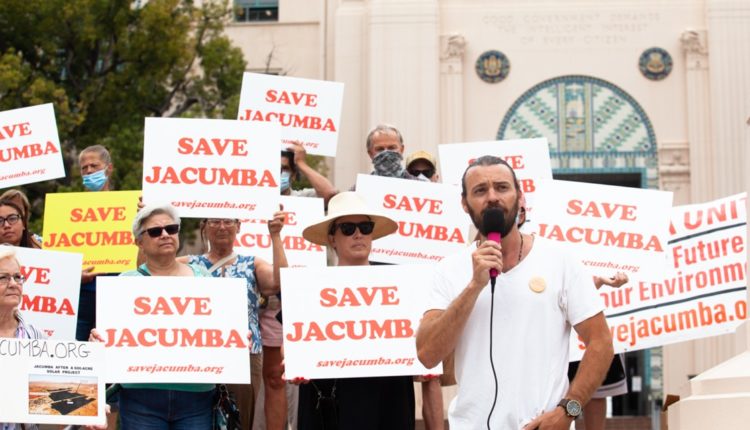 As California seeks 100% zero-carbon electricity by 2045, momentum is building behind renewable energy projects.

SAN DIEGO COUNTY, Calif. — The San Diego County Board of Supervisors voted 5-0 Wednesday to approve a permit to build the county’s largest solar farm in Jacumba Hot Springs despite opposition from many of the town’s residents who said the project’s size and location would strangle community growth.

The supervisors’ approval requires the developer to increase the cash it provides to the community from $1.6 million to $4 million and to increase the buffer space between homes and the solar panels from 300 to 400 feet or more.

Several supervisors said the vote was a tough decision, but one that considered the county’s broader renewable energy goals.

“Our planet is on fire and we cannot continue to delay action to tackle climate change,” said Chairman Nathan Fletcher.

Supervisor Terra Lawson-Remer said she was in favor of the developer’s proposal in concept but didn’t think it made the community whole.

“This is the kind of environmental injustice that I think we fear when we look at big scale energy investments,” she said, later negotiating the additional changes and voting in favor of the project.

Jeffrey Osborne, one of the new co-owners of the majority of the property in town, including the Jacumba Hot Springs Hotel, said the problem was not money, but size.

“You’re creating a sacrifice zone as we speak,” he told the Board of Supervisors.

Here’s the scene from the mezzanine as community members speak in opposition to the project. There are more than 50 group & individual speakers lined up. pic.twitter.com/NI01GFE3kE

The renewable energy arm of BayWa, a Germany-based company, wants to break ground on the solar farm early next year and have it up and running by early 2023. The 604 acres of solar panels would lie east of Jacumba, starting just beyond the town, and sandwich historic Old Highway 80, which offers views of the desert, mountains and the U.S.-Mexico border a half-mile away.

The developer is under contract to send the 90 megawatts of power from the solar panels to San Diego Community Power, which provides renewable electricity to the cities of Chula Vista, Encinitas, Imperial Beach, La Mesa and San Diego using San Diego Gas & Electric’s grid. The project would power about 57,000 homes.

BayWa and some community members, have been at odds over how best to use the site, which is fallow farmland, and how best to offset the impact on the town.

Osborne is one of the most vocal critics, but more than 50 group and individual speakers requested to talk at the Board of Supervisors meeting, the majority in opposition. People wearing matching yellow shirts proclaiming “Save Jacumba” filled the chamber to capacity.

Some residents’ concerns include the loss of vistats that drive tourism, the heat island effect the dark solar panels could create and the difficulty of landing a glider at the nearby Jacumba airport.

They have also pointed out that in addition to receiving none of the clean energy from the solar panels that will be built near their homes once the project is complete, they also will continue to experience SDG&E’s power shut-offs during periods of high wind and fire risk.

The Jacumba Hot Springs Community Sponsor Group, which officially advises the county on land use decisions, advocated for BayWa to scale down the more than 600-acre solar farm to roughly 300 acres and to provide back-up power for the town as well as build hiking and wildlife corridors.

But the company said that plan would not work.

Instead, BayWa has sought to provide community benefits in the form of cash, striking deals with the Jacumba Community Services District and the Imperial Valley Desert Museum to provide $325,000 for a community park and a museum exhibit. The county’s Planning Commission had already urged the developer to do more for the community when it voted to approve the project on July 9, and the developer told the Board of Supervisors it would commit $1.6 million, although it had not finalized any additional agreements before the meeting. Among the proposals is $1 million for solar systems for the homes and businesses of Jacumba community members and $125,000 for a senior nutrition program at San Ysidro Health.

The supervisors voted Wednesday to get county staff involved to help the developer and the community negotiate the additional community benefits agreed upon at the meeting.

The project has the support of the International Brotherhood of Electrical Workers, which cited the creation of construction jobs, and CleanTech San Diego, a clean energy association which cited environmental and economic benefits.

Also driving momentum is a statewide push toward renewable energy. Public officials and utilities are under pressure to help California meet its goal of deriving 100% of its electricity from renewable and carbon-free resources by 2045 to limit climate change. County supervisors voted on Feb. 10 to approve measures to streamline renewable energy development in the backcountry.

Six other wind or solar projects are in various planning and permitting phases within 17 miles of Jacumba.

The now-fallow land slated for the Jacumba solar project had been a farm until 2012 and was once considered for housing. The property stretches from Interstate 8 to the U.S.-Mexico border. Totalling 1,356 acres, the site would also include a permanent switchyard, 90 megawatts in battery storage, open space and landscaping along a perimeter fence.

The project’s approval comes with a plan to take down the panels after 35 years, although the developer could seek another permit to extend the project. Opponents say the solar farm’s permanency beyond 35 years is inevitable.