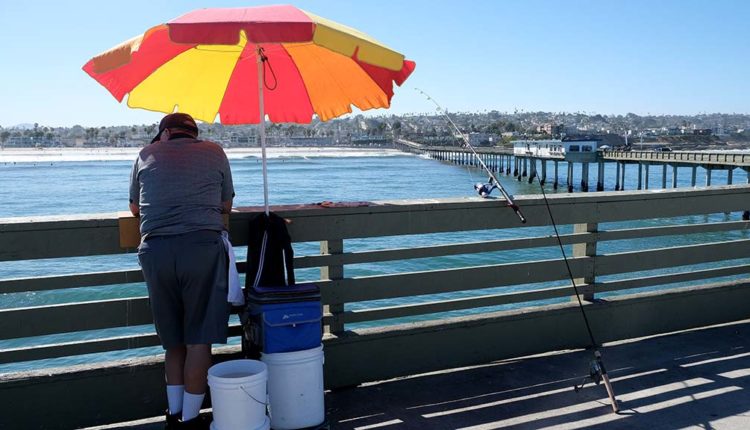 A fisherman at the Ocean Beach Pier. Photo by Chris Stone

Monsoon moisture was forecast to bring periods of clouds and even a chance for a stray burst of showers or thunderstorm in San Diego County, the National Weather Service said Sunday.

Additional rainfall was likely to be just a trace to a few hundredths of an inch. The maximum so far has been 0.03” at Montgomery Field, Santee and Borrego Palm Canyon.

Higher amounts of 0.10-0.25” were possible in the mountains Sunday afternoon, when there was a slight chance of thunderstorms. Farther north, dry weather was expected to continue, the NWS said.

High temperatures along the coast Sunday are predicted to reach 79 degrees, 86 inland, 90 in the western valleys, 97 near the foothills, 95 in the mountains and around 105 in the deserts, according to the weather service.

A strong ridge centered over Northern California and a westbound trough over Mexico was expected to keep a brisk easterly flow over Southern California through Monday, the weather service said.

Occasional clouds and increasing low-level moisture was expected to help moderate daytime temperatures, except over the high deserts, where excessive heat was forecast through Monday.

Later this week, a trough along the West Coast is forecast to bring a drier southwest flow aloft, and cooler weather.

On Tuesday, the winds are likely to weaken as the ridge to the north collapses and the trough deepens from the north as atmospheric moisture dries up over the mountains and deserts, forecasters said.

This will not be the case over the coastal basin though, because low pressure will be slowly developing in the mid-lower atmosphere just off the coast, the weather service said.

This flow will favor a deep marine layer and more low clouds into next weekend.