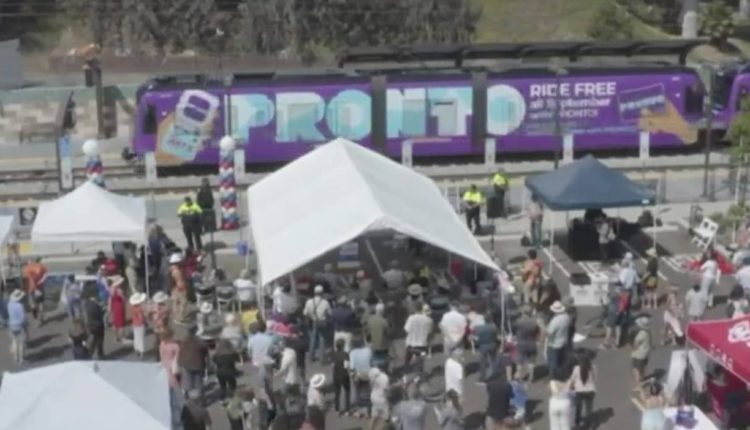 Hundreds of people had the opportunity to ride a portion of the trolley extension before it opens in November. The rides were part of Saturday’s Mid-Coast on Morena Community Appreciation Festival.

The $2.1 billion Mid-Coast Extension is a SANDAG priority project. It will add 11 miles to the UC San Diego Blue Line Trolley, extending service from Downtown San Diego north to the University Community. The extension includes nine new trolley stations, three of which are located along Morena Boulevard.

SANDAG Chair and Encinitas Mayor Catherine Blakespear was joined at the event by MTS Vice Chair and National City Mayor Alejandra Sotelo-Solis and Congressman Scott Peters, a long-time trolley supporter who was instrumental in obtaining federal funding for the project.

“Today is about celebrating the community members who have guided and supported this project every step of the way. SANDAG is incredibly proud to build this significant project and in just a few months, we will deliver it to MTS to operate,” Blakespear said. “This is a significant step toward achieving SANDAG’s vision for the 2021 Regional Plan to provide faster, fairer and cleaner transportation options that will serve the region for generations to come.”

TransNet, the half-cent sales tax administered by SANDAG, will fund approximately half of the project, with the remaining funding being provided by a grant from the Federal Transit Administration.

“The progress of the Mid-Coast Extension has had my full support from the very beginning. What started as a simple idea to improve regional transit options is now a monumental project that will move commuters more efficiently and cleanly, easing traffic congestion and improving air quality,” Peters said. “Securing more than $1 billion to make this historic $2.1 billion project a reality has been a priority for me in Congress and I look forward to the inaugural ride in a few months.”

Major construction for the extension began in 2016, and the project remains on budget and on schedule.

Attendees were encouraged to take the Trolley from the Old Town Transit Center where staff were present to direct riders to the appropriate trolley. Limited parking was available at the Tecolote Road Trolley Station and the Balboa Avenue Transit Center.

“There are so many positives to a project like Mid-Coast,” said Mayor Todd Gloria, SANDAG vice chair at an event for public officials earlier in the week. “It will have a transformative impact on regional transit connectivity.

“Among many benefits, this trolley expansion will create better job opportunities for families, and better access to education for students,” he continued. “It will help our fight against climate change and at the same time boost economic activity.”

There is no other public access to the stations or the tracks until opening day. Construction is still ongoing on portions of the extension and active trains will be on the tracks. Testing and training on the extension will take place for approximately three more months to ensure the system is ready to carry passengers.

To support the extra service, MTS has added 45 new trolleys built by Siemens Mobility and partially funded by TransNet.

MTS added 128 new positions including train operators, security, maintenance, IT and more to manage the extension. MTS has also made significant enhancements to its bus service to align with the trolley extension. The agency will replace two existing express routes, modify seven exiting east-west connections and implement three new routes that connect to the trolley.

“This trolley extension is going to open up brand new destinations for people in the South Bay and all over the San Diego region without ever having to get in a car,” Sotelo-Solis said. “It will provide incredible new connections… It’s truly a gateway to opportunity.”